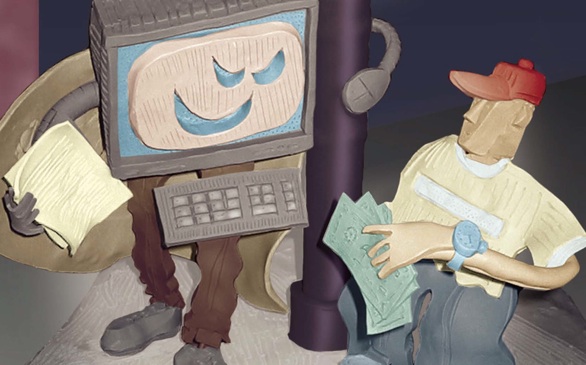 Students pay for term papers online; is it wrong for tutors to get paid for doing other's homework?
(Credit: Richard Hodges/Columbus Ledger-Enquirer/MCT)

Student athletes are cheaters. Okay, probably not all athletes.

But it's a known fact that for many college athletes who go to go school full time and play a sport, keeping up in every class can be pretty difficult. So, it's not surprising when we hear former student athletes, like basketball star Rashad McCants from the University of North Carolina, admit to cheating to stay eligible to play.

And it's definitely not a surprise to VICE writer Mike Abu, who openly admitted to helping athletes cheat on their homework at his alma mater.

Abu attended the University of Utah (a Division I school), where he worked as a student tutor to pay for "food and booze." As a tutor, he willingly did student athletes' homework, including football players'.

"Eventually, I became the go-to tutor for jocks," he wrote in a VICE article. "At first, I tried to help them work through their boring macroeconomics multiple-choice homework, but it became more and more apparent that they didn't care about learning any of it."

However, Abu didn't blame the athletes for not caring. When an offensive lineman came to him and offered to give him three hours worth of tutoring "slips" (which students bought at the tutor center for $10 to give to a tutor to recieve help in their classes. The tutor would then give the slip back to the tutoring center to collect his or her paycheck) if Abu just did his economics homework for him, Abu agreed.

"I didn't even hesitate before saying yes. I mean, so what?" he writes. "And helping him cheat the system didn't seem any more unethical than forcing some kid to learn about how great capitalism is. "

Abu's students got As, and he claims the coaches knew all about the cheating system.

Throughout the article, Abu asserts that "academic fraud is alive and well throughout the system," citing companies that write students' papers for a monetary fee, professors who plagiarize one another's papers and the student loan system, "a system that has cheated this generation's middle class youth out of a future."

Of course, there are those who will criticize what Abu did. In fact, one commenter stated, "In all honesty, your university should revoke your degree for blatantly bragging about cheating in a national publication."

But then there are others who argue student athletes are only expected to perform well on the field (or court), and no one gives a damn about their grades—the NCAA and colleges know their moneymaker is these athletes' ability to throw a ball or catch a pass.

Thus, this raises a dozen of questions. One of ours: what if colleges offered athletes the choice to major in athletics? Sure, it sounds silly, but perhaps this is something we might see in the distant future.

In the meantime, could we really expect cheating on the collegiate level to disappear soon? I don't think so.

And as Abu wrote, "Our education system is just one giant hustle—and if you ain't hustling, you're getting hustled."