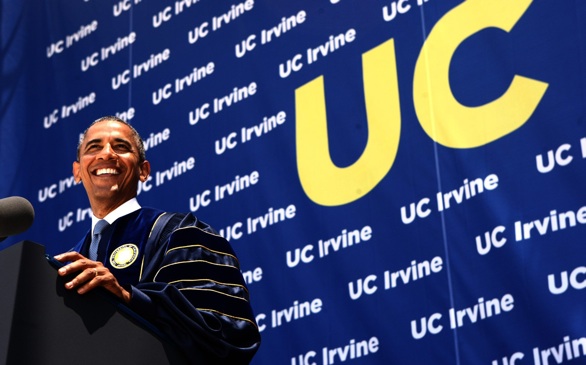 President Obama's commencement address, delivered to thousands of UC Irvine graduates Saturday, focused on the aspirations of the current generation and the need for optimism when dealing with future problems.

More than 8,000 graduates and their families jumped to their feet, loudly sharing their approval, as Obama took the stage to deliver UC Irvine's 50th commencement address at Angel Stadium of Anaheim.

The president applauded the graduates, who despite facing "dizzying change," represent the most optimistic generation in America today, he said.

"I'm here to tell you that you are right to be optimistic," he continued. "Consider this, since the time most of you graduated from high school, fewer Americans are at war, more have health insurance, more are graduating from college."

Saturday's commencement was the first of two ceremonies that will honor the 8,599 undergraduate and graduate students in the class of 2014. Each of UC Irvine's individual schools will host their own ceremonies Sunday.

As the graduates filed onto the field, university officials gave a brief history of each of the university's colleges and large departments and listed some of their accolades.

Obama's speech marks the culmination of UCI's year-long effort to get the president to Orange County.

UC Irvine students mailed more than 10,000 postcards and video invitations to the White House to request that the president speak at a university-wide graduation ceremony.

"This is an incredible milestone for UCI," School of Law graduate Erna Mamikonyan said. "To have a sitting president not only consider, but agree to speak at commencement, is a great achievement for UCI and speaks volumes for our institution."

The schools' faculty and students generally select their own commencement speakers, but UCI officials decided last year they wanted to host Obama to mark the campus' 50th anniversary.

Because President Lyndon B. Johnson attended the university's dedication in Irvine in 1964, UCI administrators believed having Obama speak would be an opportunity to pay homage to the college's roots.

Obama also had some internal pressure to deliver the address from his assistant, Ferial Govashiri, who is a UCI alumna. Her brother is one of the thousands of students who will graduate this weekend.

"Until today, I did not understand why she greets me every morning by shouting 'Zot, Zot, Zot!' " he said of the Anteaters' fight song. "It's been a little weird."

Obama focused the majority of his speech on the issue of climate change. He urged graduates to become environmental stewards and encouraged the media to be aggressive in their coverage of the issue.

"Since this is a very educated group, you already know the science," he said. "The question is whether we have the will to act before it's too late, or we fail to protect the world we leave not just to my children, but to your children."

He seized the opportunity to announce the creation of a $1-billion fund that will invite communities that have experienced national disasters to compete for funds to help them rebuild and secure against similar events in the future.

Anthony Chen, 17, was impressed by the president's remarks.

"I think he made a lot of excellent points," he said. "He's obviously a prolific speaker, but what he said is true, we're going to change the world."

Chen proudly watched from the baseball stands with his father as his older brother stepped onto the field in his cap and gown.

"This was a great moment for him," Chen said.

Protesters began gathering in the parking lot hours before the commencement began and continued to hold signs long after graduates began filing out of the stadium in the afternoon.

Just after 6:45 a.m., about 30 protesters — many of whom belong to a Santa Ana-based migrant group called RAIZ that aims to stop deportations — held signs and chanted as graduation attendees passed them across from the stadium.

Mark Steven, of Anaheim, said he decided to stand outside the stadium to promote his own message.

"We came here to preach," he said. "We don't agree with [Obama's] politics, but you can debate about that all day. We thought it would be a wonderful opportunity to share the words of Jesus."

Still, there were many supporters present at the stadium.

Although they had heard Obama speak before he was elected to office, Ryan Sanders and his wife, Erin, both 2006 UCI graduates, brought their newborn baby McKenna to listen to the president.

"We loved our UCI experience, so it's always nice to come out and support the graduates," Ryan Sanders said. "We definitely wanted to hear Obama speak, we're big supporters."

Obama ended his speech by reiterating his excitement for the graduates and the generation they represent.

Campus News
USC offers free tuition to families making under $80,000 and a break for homeowners
61 views