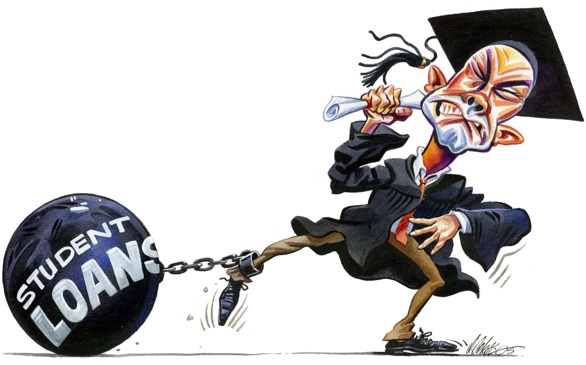 The prospect of a lower monthly bill on his $70,000 student loans is music to Nathan Marken's expensively trained ears.

A property manager by day and opera singer by night, the San Francisco resident has managed to pay the $500 bill awaiting him each month, at the expense of retirement savings and other investments. But a plan announced this week by President Barack Obama that would cap monthly payments as a percentage of a borrower's income could ease the burden for heavily indebted college graduates such as Marken.

"Something has to be done," he said, "and I think the president is doing what he can."

Marken is one of millions of borrowers likely to be eligible by the end of 2015 for a program known as Pay As You Earn, generally considered the government's most generous repayment plan for direct federal loans.

Now available only to recent borrowers -- and still not widely known or understood -- the 2-year-old program will be extended to those who took out their first federal loan before Oct. 1, 2007, or who haven't borrowed since October 2011. The president acted unilaterally to avoid going through a deadlocked Congress, which on Wednesday blocked a student loan financing bill offered by Sen. Elizabeth Warren, D-Mass.

Republican opponents of student debt relief say it's an election-year ploy that will end up costing taxpayers.

The expansion could bring relief to some 5 million people, including 423,500 more Californians, the Department of Education estimates.

Here's how it works:

Pay As You Earn caps student loan bills at 10 percent of discretionary income -- the adjusted gross pay reported to the IRS minus about $17,500 annually for a single person and about $23,600 for a family of two.

It forgives the loan after 20 years, or after 10 if for workers in the public sector or with a nonprofit.

Unlike traditional payment plans, which have set monthly payments, this loan bill fluctuates with salary and family size. That means borrowers must annually update their income and household size -- information used to calculate the payment.

California alone has more than 4 million borrowers who are $103.4 billion in debt, a greater sum than in any other state, according to 2014 U.S. Department of Education estimates cited in a White House report released last week. The total U.S. student loan debt has risen to more than $1 trillion.

Allowing more people to tie their payment to their earnings is just one solution, proponents say, but it could keep more people -- especially those who are unemployed or want to return to school -- from defaulting on their federal loans during lean times.

"Pay As You Earn can be kind of a backstop and prevent some of the defaults that we're seeing," said Jennifer Wang of the Young Invincibles, a national organization that has pushed for student loan reforms.

The Department of Education has vowed to educate more borrowers, especially those on the brink of default, about their options -- which is crucial, Wang and other advocates say.

A 2012 survey of those owing more than $75,000 found that 40 percent did not recall receiving any counseling on their student loans, although it is required by law.

Outreach by the Department of Education last year boosted enrollment in income-based repayment plans by 40 percent, a promising statistic as the government seeks to reach more borrowers.

Marken, who graduated in 2008 from the San Francisco Conservatory of Music, is already weighing his options after hearing the news and expects to compare notes with his friends. As he decides whether to apply for Pay As You Earn, he said, he will consider the lower monthly payment against the length of the loan and the total interest he would pay.

In a White House example, the monthly payments on $26,500 direct federal loans for a teacher earning $39,000 a year would drop by $126 under Pay As You Earn, compared with a traditional repayment plan.

Another attempt to help borrowers hit an obstacle this week: Warren's student loan refinancing bill was blocked Wednesday in the Senate when proponents failed to get the 60 votes needed to overcome a Republican filibuster.

Obama had urged Congress to support the legislation to allow borrowers to refinance their loans at the current interest rate of 3.86 percent, but Republicans opposed it, in part because it would be funded by new taxes on the wealthy. The White House estimates it would help some 25 million people, saving typical borrowers about $2,000 over the life of their loans.

"It's extremely disappointing that the Senate would block a bill that would provide immediate relief to student loan borrowers," Wang said.