Questions Linger Over Use of 'Trigger Warnings' for College Classes 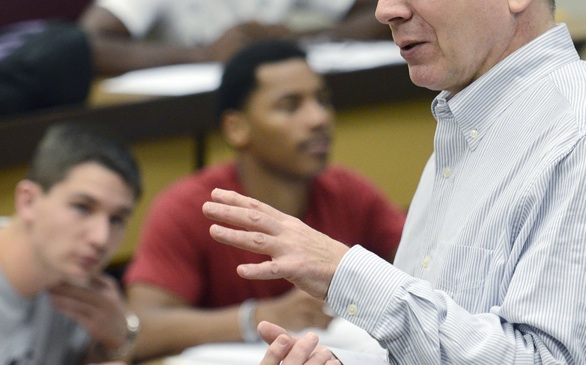 From the first day of class, Ohio State University students knew which readings in their women’s studies course would involve violence, rape or other troubling topics.

It was on the syllabus, typed in bold next to each of those essays — trigger warning — a shorthand alerting those who had been through certain traumatic events that the texts could be especially jarring.

Students who didn’t want to continue still had time to drop the class last spring without penalty. The idea is akin to warnings that air before television shows that depict violence or nudity.

“This is something that we have been dealing with ever since women’s studies departments have come into being,” said Jill Bystydzienski, chairwoman of the OSU Department of Women’s, Gender And Sexuality Studies.

“We do deal with issues in our courses that are sensitive and can re-traumatize people.”

Such warnings have become popular online, spreading from early use on feminist blogs. Now, professors and college students are calling for similar warnings across disciplines and for a broad array of traumatic events, including suicide, religious persecution, racism and colonialism.

A student at Rutgers University in New Jersey wrote in the campus newspaper that F. Scott Fitzgerald’s novel The Great Gatsby needs a warning for “gory, abusive and misogynistic violence.” Virginia Woolf’s Mrs. Dalloway could use one for themes of suicide and postwar trauma, the student wrote.

At the University of California-Santa Barbara, the student senate pushed for rules requiring professors to warn students in syllabuses about anything that could trigger symptoms of post-traumatic stress disorder. The group also asked professors not to dock points for students who opt out of lectures that cover that material.

“Triggers are not only relevant to sexual misconduct but also to anything that might cause trauma,” including racism, classism and sexism, the draft read.

As an example, the group wrote a caution for Chinua Achebe’s novel Things Fall Apart: “Trigger warning: This book contains a scene of suicide.”

The Oberlin committee rescinded the guidelines for further review amid a debate over academic freedom, both on that campus and across the country.

Those calling for warnings often say that students shouldn’t have to choose between academic success and their well-being. Warnings, advocates have said, protect students from reliving painful events.

Opponents counter that warnings amount to “spoilers,” and that authors of many major works intended to unsettle their readers. Some equate warnings to a form of censorship that deters professors from teaching controversial ideas.

“It could lead students to expect or demand these kinds of trigger warnings, and if you don’t have them in your class, then you are open to complaints,” said Ashley Thorne, a spokeswoman for the National Association of Scholars, a New York group that supports academic freedom.

“The best books do have uncomfortable, sometimes even disturbing content, and I think it takes maturity to encounter that,” Thorne said.

As trigger warnings spread to the classroom, some critics have questioned where else they appear.

Last year, the campus newspaper at Ohio Wesleyan University in Delaware included a warning before an opinion article in which a student revealed that his mother had been raped. Beneath his name, in bold, was the caution: Trigger warning: sexual assault.

Students who auditioned for a University of Cincinnati theater production of The Vagina Monologues got a warning that the excerpt they were to read “deals graphically with rape as a weapon of war.”

At Ohio State and other universities, professors traditionally have been left to decide whether a reading or video requires a caution.

OSU faculty members who teach courses on slavery, genocide and war “are aware of the sensitivities,” Peter Hahn, the chairman of the history department, wrote in an email. Some English and humanities professors have for years issued warnings about readings that deal with sexual violence or racism.

“What students will find shocking or offensive is actually notoriously difficult to predict and sometimes culturally very specific,” Richard Dutton, a humanities professor, wrote in an email. Discussions about William Shakespeare’s Othello are racially charged at Ohio State, he said, but not when he teaches in England.

“I regard it as part of my professional responsibility to try to mediate such issues, and obviously not to shock or offend,” Dutton wrote.

Still, students occasionally report that they have been “triggered” in class. Some turn to Ohio State’s Student Advocacy Center, which notifies professors.

The center receives only a few of those complaints each year, said OSU Provost Joseph Steinmetz, and they’re usually related to depictions of rape or war.

No policy requires warnings across Ohio State or its departments. But Bystydzienski trains instructors in her department to include some sort of caution early in the course, either orally or in the syllabus. The warnings don’t always pinpoint exactly which texts could include triggers. One professor simply wrote, “I also want to know if certain class topics cause you personal distress."

Those who follow that guideline rarely run into problems, Bystydzienski said. “If you don’t have a syllabus that students can look at, and they can’t see what the material is, then students are in for surprises.”