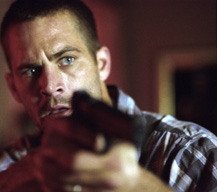 You haven’t really seen what Paul Walker can do until you’ve seen him Running Scared. In his high-energy, nerve-racking new flick, Walker pulls out all the stops trying to save his life and the lives of his family from the mob.

In Scared, Walker must locate a stolen gun used in a mob hit and get rid of it. He plays low-level New Jersey mob employee Joey Gazelle – a man who is struggling to stay afloat at work and at home, the latter of where he is a husband and father to an 11-year-old son. Though this is the first time Walker is playing a father onscreen, in real life he has much experience in the arena.

"I think having a daughter gives [me] more to pull from," says Walker. "More of it probably comes from being from a big family. I have a brother that’s 15 years younger than me. I was in a sense a young father growing up more than a brother. At 15-years-old I was changing his diapers."

Walker was immediately drawn to the film after reading the script. "The truth is this is the kind of movie I like," he says. "This is what I like to go and see. I like movies that are high stakes. I felt like this was very dark."

The darkness of the film, however, turned out to be somewhat of a concern for Walker. The controversial material might mean a studio would not be willing to take a risk on producing it. "A lot of people will not like this movie," Walker admits.

Walker adds, "Wayne [Kramer, the director] assured me he wasn’t afraid to commit to that and probably take it even darker than what we saw on the page. He said ‘the one thing I can promise you [is that] you won’t have to worry about the studio breathing down our necks telling us we need to soften it because, quite frankly, we don’t have a studio.’"

In Running Scared, Walker did most of his own stunts. He was fortunate enough to have previously worked with most of the actors he would be fighting. "I try to bring in the same guys because they know I like to really be hit as opposed to faking the hit," says Walker. "I don’t like to get hit real hard but I like to get hit."

Kramer is known for his obsessive storyboarding of each scene when he films. While some actors would find this behavior inhibiting creatively, Walker finds relief in it. "There are restrictions but at the same time it gives you so much peace of mind. When someone has put that much work, time, effort and energy into [storyboarding], I’m damned if I’m not going to match it."

Working with somewhat unknown-yet-veteran actress Vera Farmiga, who plays Walker’s wife, was more than a pleasure for Walker. "She’s my favorite. She’s a rare breed … super smart, attractive. She’s got it together, just real genuine, just a good person." All of these qualities helped when Walker showed up for the first day of filming to discover that their sex scene was scene number one on the shooting schedule. "I think we had two dinners together, we were in a group … right after that I was making love to her on a washing machine. That was it, that was the very first day."

Walker keeps his schedule busy (he has made five films since he shot Running Scared), but this grounded actor proclaims to "excel at disappearing" after each role. "I’ll change my cell phone three or four times a year so people can’t get a hold of me. That’s the only way in the extremes that I find a balance," he says, concluding. "Otherwise I’ll lose my head."