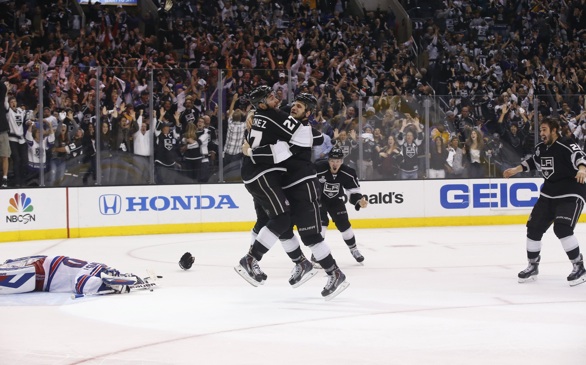 Players Justin Williams and Alec Martinez will appear on the show to talk to Kimmel about their second championship win in three seasons. Williams won the Conn Smythe trophy as the postseason MVP, and Martinez scored the double overtime winning goal, giving the Kings a 3-2 win over the Rangers.

Also on the show will be New York City mayor Bill de Blasio. Prior to Game 1 of the 2014 Stanley Cup Final, de Blasio waged a bet against L.A. mayor Eric Garcetti: if the Kings won, de Blasio would perform a rendition of Randy Newman's "I Love LA" on Kimmel's show (if the Kings lost, Garcetti would've performed Frank Sinatra's "New York, New York" on the show).

Plus, the losing mayor would also provide a local favorite for everyone in Kimmel's audience. So, de Blasio will import hot dogs from Grays Papaya, an authentic New York treat.

De Blasio will be on "Jimmy Kimmel Live" via satellite from Times Square, but Garcetti will be at Kimmel's studio.

Meanwhile, a celebration parade is taking place in downtown Los Angeles near LA Live on Monday. At around 1 p.m., STAPLES Center will host a rally.