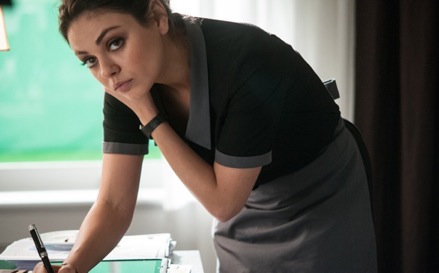 Do you enjoy watching a film where all of the loose ends are intentionally left untied after the credits roll? Some of us crave this type of filmmaking that allows us to draw our own conclusions…but some of us would rather watch a movie that delivers a solid ending—no questions, no guessing and no speculation.

Well, Paul Haggis’ Third Person doesn’t answer many questions, yet it still manages to leave a powerful impact on the viewer.

“I wanted to make a film in which you were emotionally moved at the end,” said the director at a recent press conference. “You felt satisfied, and then you had to walk outside with your friends afterwards and say, ‘What the hell happened? What was this? What was that?’ and discuss it, and enjoy it, and come up with answers days later, maybe.”

Sitting at a table next to three of the film’s stars (Kunis, Atias and Bello), Haggis passionately explained that in today’s cinema, unanswered questions and ambiguity are what we need. “I think very often now we’re asked to underline everything—bold-faced, all caps—and explain every moment in the film,” he said.

Inspired by the likes of Italian director Michelangelo Antonioni and Spanish filmmaker Luis Buñuel, Haggis decided to endure the “long, tortured process” of writing a script for a film that ultimately challenges viewers.

But of course, achieving such a feat requires more than just a really sharp script; it requires brave actors who are dedicated to their roles.

“It was important to me that [the characters] be human,” said Haggis, “and then I just casted really well. All of these actors took really challenging roles…and I think it’s the bravery of these actors in this film that really makes it.”

Kunis, who especially exhibited that bravery in a scene with Franco where she was violently dragged across the floor, agreed with him. “I wanted to work with Paul, and then reading the script and having it not be a ‘girl next door’ character was a relief,” she said.

Portraying a young, troubled mother fighting to get visitation rights to see her son, the now-pregnant Kunis saw Third Person as a milestone in her career. “I looked at this film as an end to my 20s. It was a massive therapy session for myself, and it was really, selfishly, incredibly gratifying,” she said.

This “therapeutic” experience was largely attributed to Haggis, who is unlike some directors she has worked with in the past.

With that being said, perhaps anyone skeptical of Third Person should take a note from Haggis and do what he does best: trust. After all, he has brought us powerful, moving films such as Crash (2004), In the Valley of Elah (2007) and Million Dollar Baby (writer, 2004)—it’s safe to say his latest film is not a disappointment, even though it leaves some loose ends untied.

When a FREE Third Person poster by clicking here!