U.S. Fans Show Up in Strength for World Cup Victory Over Ghana 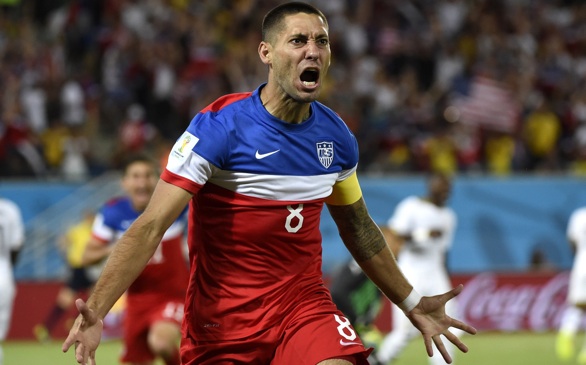 Vice President Joe Biden was among the 39,760 who watched the U.S. beat Ghana in a World Cup opener on Monday at Arena das Dunas. And he must have felt right at home since the stands were full of red, white and blue.

Local media had predicted that as many as 20,000 American fans would show up, and though the U.S. fell short of that number, it nevertheless had a substantial throng. At least a third of the crowd appeared to be on the U.S. side and two of its members were the father-and-son duo of Brad and Chip Robinson from Dallas, who were wearing red, white and blue from head to toe.

"It's really awesome to see that much strength together, united all for one goal," father Brad said.

"It just shows how many Americans do care about soccer," his son added. "There's 20,000 all the way down in Brazil? That shows that they do care."

Both men are members of the American Outlaws, U.S. Soccer's largest supporter group. Brad founded the Dallas chapter five years ago. At the time it was the group's ninth chapter. Today there are 128 with a dues-paying membership of nearly 20,000.

In the days leading up to the game, Natal's beachfront looked like Daytona Beach during spring break. Hundreds of people in U.S. Soccer jerseys — many bearing the name of the missing Landon Donovan — clogged the sidewalks and filled the city's tiny restaurants and bars. And a party hosted by U.S. Soccer and the Outlaws on Sunday night drew nearly 3,000.

"It's a brotherhood, man," Matthew Nunez, a food truck driver from Washington, D.C., said at halftime. "I expected my country to represent."

And the crowds could get bigger. Although more World Cup tickets were sold in the U.S. — 154,000-plus — than in any country outside Brazil, according to Viagogo, the world's largest ticket exchange, there has been a 127% spike in Internet searches for tickets to U.S. games over the last five days.

With the opening whistle in Natal, defender DaMarcus Beasley made U.S. Soccer history by becoming the first American to play in four World Cups.

Goalkeeper Kasey Keller and midfielder Claudio Reyna both made four World Cup teams, but Keller did not play a minute in 1990 or 2002 and Reyna did not play in 1994 after being injured.

Donovan, who played in the last three World Cups, could have joined Beasley in the history, but he was among Klinsmann's final roster cuts.

Clint Dempsey also had a record-setting night, scoring the fastest goal in the U.S.' World Cup history while becoming the first American to score in three consecutive World Cups.

But afterward all he wanted to talk about was the team. Well, that and his nose, which he thinks is broken.

"Hopefully I'll be able to start breathing through my nose again," he wheezed.

Of the team and the resilience it showed in bouncing back after losing a lead it had held for 81 minutes, he was more was expansive.

"It shows great character," the U.S. captain said. "It's a huge three points for us. I don't think that we played our best game but … everybody played their hearts out."