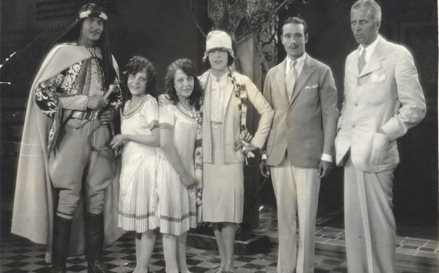 Back in the earlier part of the 20th century, before movies and television dominated the entertainment scene, the carnival was a place to inspire awe and wonder. And at the very forefront, seamlessly stealing all the spotlight, were two young sisters joined at the hip...literally. Being different was their claim to fame—or so they hoped.

Director Leslie Zemeckis brings us her latest documentary Bound By Flesh, which traces the outstandingly successful yet tragic careers of the Hilton sisters, Daisy and Violet. Attached by a reasonably small piece of flesh on the back of their hips, the twins' mother couldn't look past their abnormality. So, they were sold at birth to their midwife, "evil Auntie Mary Hilton." From then on, they were seen as just a piece of property to those who sought a profit from their disfigurement and knack for performing.

Through interviews with the twins' family members, prominent carnival figureheads and even an old recorded testimony by the sisters themselves, Zemeckis uncovers the factors that would cause the sisters' downfall: the mistakes in their upbringing, their parental figures' atrocities and eventually the hastiness of their own free will.

It is the tragic irony within the Hilton's story that becomes Bound By Flesh's most intriguing aspect. All their lives, the sisters never knew freedom, as they were constantly under the tyrannical control of one of their many money-hungry guardians. But in the end, it would be their freedom that would cause their demise.

When they realized how much money their act as singers, dancers and entertainers was worth, the sisters fought for their freedom with the courts' support. When they won their emancipation lawsuit, their careers plummeted. Just like coming up for air and inhaling too much oxygen at once, the girls floundered in their newfound independence, blind to the way the business worked without their puppet strings to guide them.

Wife of film tycoon Robert Zemeckis (Back to the Future, Cast Away, Forest Gump), Leslie Zemeckis is known more for her acting (Beowulf, The Polar Express) than filmmaking. Her only other documentary under her belt is Behind the Burly Q (2010), which focuses on a similar time period and subject matter. From both efforts, we can tell she certainly has a skill for capturing early entertainment's texture and spirit.

While it is fascinating to witness the Hilton sisters' journey of growing from a successful sideshow act in fairs across the world to one of the most prominent acts on Vaudeville in America, Zemeckis does seem to hit her climax a bit too early in Bound By Flesh.

Once the girls win their freedom, the doc becomes somewhat monotonous in its account of their fall from stardom. While it's absolutely a necessary part of their story, it comes too early. To fill up the screen time, we're shown repetitive images of the aging twins, and Zemeckis fills the latter two acts with anecdotes of their now sad and despondent lives. Bound By Flesh loses its flare that it sparked in the beginning.

However, the tale of the sisters' reign over the glamorous stage easily captures the imagination of a time that once was. It leaves a bitter taste on the tongue, questioning what the Hilton sisters could have been if their freedom had been theirs from the beginning. Zemeckis looks back on them with enough care to appreciate the impact they had in the limelight.

Bound By Flesh releases in Los Angeles at the Arena Cinema on Friday, June 27, 2014.