4 Reasons USC is an Entrepreneurial Powerhouse 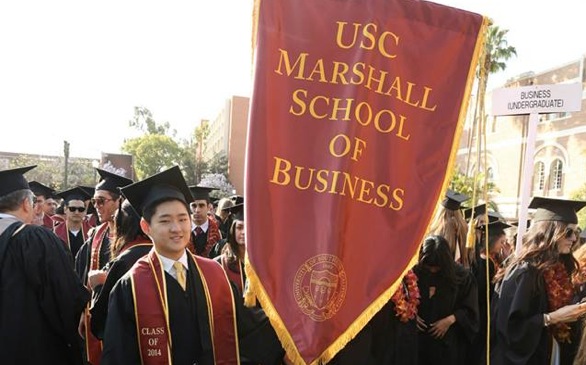 It’s 9 a.m. on a hot Wednesday morning and Tyler Wilson, founder of popular sausage-and-beer joint Wurstkuche, is working on a new cafe he’s opened in Los Angeles with Tyler Wells of Handsome Coffee Roasters. And outlining plans for turning a rented dump truck into an impromptu pool for the weekend. Not to mention, it’s crunch time for the July grand opening of a new Wurstkuche location in Denver.

He can barely keep up with his email, but Wilson, a former student at the University of Southern California’s Lloyd Greif Center for Entrepreneurial Studies, will make time when his former professors ask him to drop by and speak to the next class of entrepreneurs.

At universities across the country, entrepreneurship programs are on the rise, and USC’s is top tier. This year, its program was ranked No. 2 by U.S. News & World Report, behind mainstay Babson College and ahead of MIT.

No doubt contributing to USC’s reputation as an entrepreneurial powerhouse is an official business accelerator and startup incubator; five venture competitions with a total of $200,000 at stake; five student-run entrepreneurial clubs; and 60 courses in entrepreneurship, taught by 25 professors, most of whom run their own companies as well.

“The program is phenomenal,” Wilson said, noting that he was able to take entrepreneurship classes even though he was rejected from the Marshall School of Business three times because of less-than-stellar grades.

“Tom O’Malia said they could always make room for an entrepreneur who’s driven,” Wilson said about the center’s program director. “The cool thing is, getting rejected from the business school meant I didn’t have to take any business classes, so I built myself a degree program at a pace I could handle, and I learned a ton not realizing I was learning.”

In fact, he dropped out in 2008, at the beginning of his senior year, when construction began on Wurstkuche (pronounced “verst koo-kuh”).

The most important lesson Wilson learned: “Business isn’t that hard. It’s just a matter of hitting the streets,” he said. “Take your money. Buy your equipment. Build genuine relationships. Just do it.”

Here are four more reasons USC is an entrepreneurial powerhouse.

THE ALUMNI ARE LEGIT: Wilson is one in a legion of successful entrepreneurs with ties to USC. Others include founders of companies like Myspace, Salesforce, Kinko’s and, more recently, mobile dating application Tinder. In less than two years, that startup has grown into a social phenomenon that facilitates more than 11 million matches and 800 million profile ratings every day.

“At the business school, I learned a way of digesting information and seeing why something succeeded or failed in case studies,” said Justin Mateen, Tinder’s co-founder and chief marketing officer and Class of 2008 grad.

Mateen has two other successful tech companies under his belt and said the idea for his first tech company was sparked by a statistic he heard in a class: People were spending a large chunk of their time on the computer — but only 2 percent of ad revenue had shifted to the Web because the world wasn’t yet comfortable advertising online.

Mateen created CoverCanvas, a Facebook app that included a custom ad layer allowing people to embed advertising on their Facebook pages. “That was eight years ago. We’d get $2 or $3 a click because it was a friend telling a friend, and advertisers loved it. That’s what got me into technology,” he said.

Tinder’s initial curation strategy, too, was inspired by his experience throwing parties and events at USC. The key was to infiltrate the Greek system at highly social campuses, maybe offering one free ticket to the event for every 10 sold.

“We decided to replicate that experience,” he said, since word spreads quickly in close-knit social communities.

THE FACULTY, TOO: Andrea Belz, assistant professor and head of a new master’s program in entrepreneurship coming in the fall, owns her own technology consulting practice and counts the NASA Jet Propulsion Laboratory and Caltech among her clients.

“It really is a unique setting in terms of how experienced our faculty members are. It’s being taught by people in the trenches and is tightly integrated with the market,” Belz said. “We’re not here strictly to do research. It’s a very practical, clinical, hands-on approach that treats entrepreneurship as a synthesis of all business disciplines, including finance, accounting and strategy.”

IT’S OLD SCHOOL: USC had a completely developed entrepreneurship program in the ’90s, when not a lot of schools were teaching entrepreneurship. And when it comes to commercializing tech ideas, USC was one of the first to make it a focus with the Marshall Center for Technology Commercialization.

“L.A. has a very entrepreneurial community, and the school solidified its reputation as a entrepreneurial powerhouse during the first dot-com boom, when more than a third of undergraduates were starting businesses. It was like there was something in the water,” said Kathleen Allen, an entrepreneur and professor who has taught since 1991 and serves as the founding director of the Center for Technology Commercialization.

After the crash, however, the program’s approach changed to encompass more than the traditional startup model, teaching entrepreneurial principles to help students in any career and work situation.

“Everyone wants to know who the next Facebook will be, but the fact is, I don’t think that was ever our goal, to come up with an equivalent,” Allen said. “Our goal was to have a lot of students doing entrepreneurial things, because entrepreneurship is more than just starting a business.”

THE TROJAN NETWORK RULES: USC has enough sway to bring in the likes of Cindy Crawford, Will Ferrell and Pete Carroll — all of whom spoke at business school events last year. That’s in addition to the network of alumni entrepreneurs who have stable businesses and are willing to mentor and help, which is a key part of curriculum.

“Sometimes they bring business strategies in as a case study, and the students put themselves in their shoes to think about strategic priorities. It’s really valuable for everybody,” said Helena Yli-Renko, co-director of the Lloyd Greif Center.

She can offer up case studies herself for Perception Robotics, a company she co-founded that makes tactile sensors for robots (also known as robotic skin).

“Things are easier to do because we have an incredibly well-established and high-profile advisory council,” she added. “When I joined USC I had heard the Trojan network talked about as a concept. But you can’t really know as an outsider.”