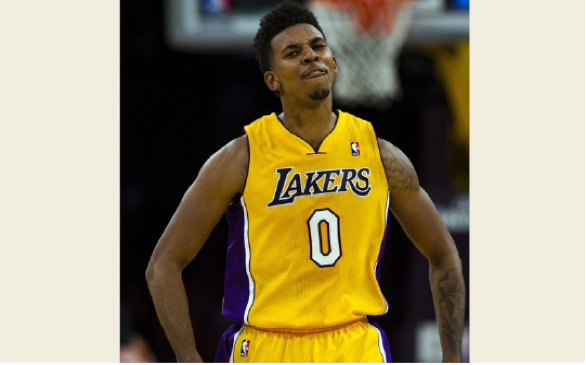 With every joke and laugh, Nick Young’s positive energy oozed through the phone as frequently as one of his scoring binges that made him a rare bright spot during a dreary Lakers’ season.

The man that calls himself “Swaggy P” just came off a recent vacation in Cabo San Lucas, Mexico. The man who entertained Lakers fans with his infectious personality plans to travel Thursday for a weekend trip in London where he insists he is modeling in a fashion show. Underneath those fun and seemingly care-free times entails some uncertainty Young will experience.

Though he considers the Lakers “his first choice” after growing up in Los Angeles and starring at Cleveland High and USC, Young will opt out of his $1.2 million player option before the June 25 deadline. That would allow Young to become an unrestricted free agent July 1 and possibly leverage a larger deal with the Lakers. Young sounded specific with what he wanted after averaging a team-leading 17.9 points on 43.4 percent shooting, primarily as a backup forward.

“Just more years. I believe I deserve more,” Young said Wednesday. “The Lakers are home, but things could happen. With free agency this year, it’s going to be crazy.”

The Lakers have only Steve Nash and Robert Sacre signed for the 2014-15 season, leaving them with up to 12 potential free agents. The Lakers will reserve one of those spots presumably for their seventh pick of the 2014 NBA draft on June 26.

The Lakers like Young for his prolific scoring, positive attitude and entertainment value. Case in point, Lakers Nation, a fan site, promoted a so-called ”Stay Swag” campaign that Young called “dope.” But the Lakers feel reluctant to offer any role player, such as Young, more than a one-year deal. The Lakers want to maximize cap flexibility to pursue high-profile players, such as LeBron James in 2014, Kevin Love in 2015 or Kevin Durant in 2016.

Young didn’t outline what dollar figure he wanted, though he joked he told Lakers general manager Mitch Kupchak that he needs “two years at $50 million to come back.” The Lakers signed Bryant for the next two years worth $48.5 million.

Young, though, sounded serious about considering a hometown discount.

“It depends how much the discount is,” Young said. “I feel comfortable in L.A. But I can’t keep taking these discounts. I need a raise a little bit. But if it’s for the right cost, they’re bringing in players and I fit into the rotation, then I’ll probably take a pay cut.”

The Lakers also need a coach after Mike D’Antoni resigned in late April. The Lakers have interviewed several veteran coaches, such as Mike Dunleavy, Byron Scott, Kurt Rambis, Alvin Gentry and Lionel Hollins. But the Lakers might not have a coach before the NBA draft. They might not even have one until after free agency begins.

Yet, Young’s future, like any member of the Lakers’ supporting cast, will partly hinge on who the Lakers hire. They would like to match players that would fit their future coach’s system.

“I want to see who they hire as a coach,” said Young, though he offered no preference for who the Lakers might hire. “I don’t think any player wants to come in when there’s no coaching staff. They might need to do that before free agency starts in order to get anybody. It’s going to be tough.”

So for now, Young will stay optimistic about his preference to roll the dice with his Lakers’ future.

“If they want you there, they’ll get you,” Young said. “They’ll find a way. I want to make sure I’m a priority on someone’s team. I feel that from L.A. but we have to see how it goes on July 1.”

Basketball
LaVar Ball: Reuniting his sons would be ‘biggest thing in NBA’
1,492 views

Basketball
The strange, ambitious marriage of the Ball family and Chino Hills
702 views