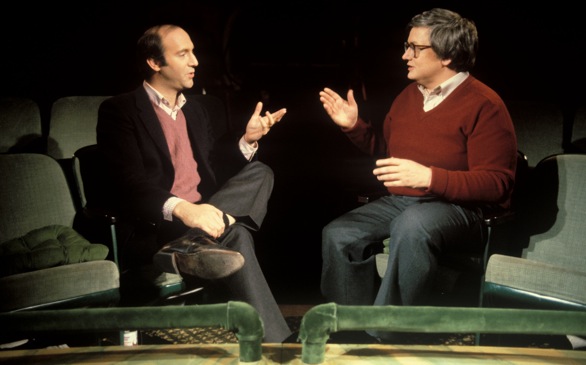 A Pulitzer Prize winner, a TV icon and one of the most respected voices in film criticism, Roger Ebert left the world with a rich legacy in his wake. Now, it appears we have a responsibility to decide how we use that legacy, continue it and honor the art that he loved so dearly.

Luckily for us, Steve James’ documentary Life Itself may have just taken the first step in doing so.

Known for the hard-hitting doc darlings Hoop Dreams (1994) and The Interrupters (2011), James handles Life Itself with a more gentle touch, reflecting on the critic’s boisterous and opinionated life. However, the director is unafraid to ask tough questions about Ebert’s life, death and life after death. By spending integral time with Ebert near the end of his days and interviewing his friends, various Ebert-criticized filmmakers and his own critics, James gives us a sneak preview of the movie that is Ebert’s life.

As an arrogant, young writer with an effortless wit, Ebert wasn’t really interested in film initially. Writing fearlessly on world politics got him on the radar, but his focus was quickly redirected when the film critic position at the Chicago Sun Times opened up and landed in his lap. As James proves, this seems to be one of the very few serendipitous moments of his life, as Ebert wasn’t a man of luck; he was a man of gumption.

Life Itself isn’t merely about Ebert’s accomplishments, however. No, James’ doc encompasses an entire life, with all of its trenches and peaks, triumphs and failures. Instead of blindly praising his body of work, showering his character with worship and admiration, James includes what many documentarians forget to: the opposition.

Doing any differently would have been an insult to the documentary and to the critic himself, seeing as Ebert was, for most of his life, a confrontational man. Amazingly, however, his combativeness paired with an unbridled passion for cinema and its possibility as art caused him to have some of the deepest and complicated relationships.

Ebert’s most tumultuous relationship, which James appropriately dedicates a large portion of the film to, was with his co-host on the PBS hit “Sneak Previews”: the late Gene Siskel. Interviews with Siskel’s widow, Marlene, account for the mutual animosity and simultaneous brimming respect the two had for one another.

Also a man a vanity, James bluntly points the camera at Ebert’s physical woes. Having suffered from a tumor on his jaw, leaving him with no physical way to form the words that he so avidly and adeptly used, Ebert fearlessly presented himself in a way never seen before.

It’s in moments like these where James reminds us why we are here, why Ebert did he what did: to talk about movies. The filmmaker reveals, with a genial and patient pacing, film’s immortal quality. No matter where your stances or alliances lay, the collective appreciation for this medium forms an underlying bond that keeps film’s pulse and relevance alive.

Filmmakers themselves attest to Ebert’s power to keep their own passion thriving. For example, Martin Scorsese said in the doc he doesn’t know if he would ever had made it past his hardest times if it weren’t for the fuel of Ebert’s words, which acted as motivation.

Similar to his previous documentaries that aim to ignite passion, James’ Life Itself prods his audience to look forward to the future of film criticism, where it precariously teeters on the brink of extinction as the Internet winds unpredictably through space. James asks us if the same hunger for cinema can be acquired when anyone can be a critic (as a critic and film lover, James forced me to look internally for my own validity). But it’s us as a collective, an audience of filmgoers, to truly decide if Ebert’s gumption shall be unmatched.

Life Itself releases in theaters and On Demand on Friday, July 4, 2014.