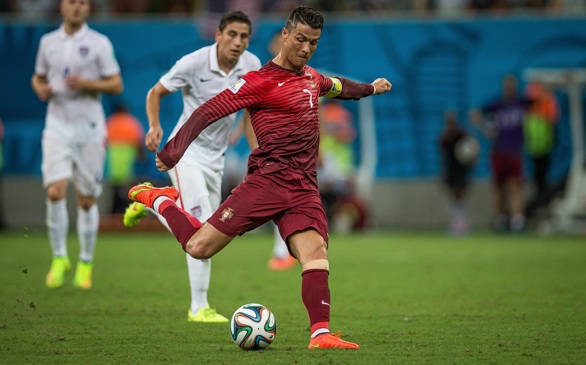 As World Cup journeys go, the U.S. has gone from being in the driver's seat to having to ask for help in getting where they'd like to be.

That's how big Portugal's goal in the closing seconds of stoppage time looms for the U.S., which had to settle for a 2-2 tie Sunday in Brazil's steamy rain forest.

With a win, the U.S. would have jumped into first place in its four-team group and guaranteed itself passage to the second round. But Cristiano Ronaldo's picture-perfect cross, which led to a diving header by Varela with 30 seconds to play, cost the U.S. two points in the standings and, at least for the moment, a spot in the knockout stage.

So now the Americans may need a little help from their friends to go through.

With a tie or a win Thursday, the final day of group play, the U.S. advances to the next round. But if it loses and Ghana scores enough goals to both beat Portugal and overcome a two-score deficit to the U.S. in goal differential, then the U.S. goes home.

And speaking of friends, guess whom Juergen Klinsmann and the U.S. play next? Germany, the team Klinsmann led to a World Cup title as a player and coached to the World Cup semifinals eight years ago.

Germany, whose coach, Joachim Loew, got his start with the national team under Klinsmann. And Germany, home to five players on the U.S. roster.

Since a tie would also send Germany on to the second round, Klinsmann was peppered Sunday with questions about the possibility of agreeing to a "friendly draw" with Loew.

"There's no such call," he said. "Jogi is doing his job and I'm doing my job. I'm going to do everything to get to the round of 16.

"There's no time to have friendship calls. It's about business now."

It's happened before, though. In 1982 West Germany and Austria agreed Germany would win the final game of group play 1-0, a result that allowed both teams to advance while eliminating Algeria.

"The U.S. knows only how to give everything it has in every game," Klinsmann said. "We have that fighting spirit and that energy and determination to do well in every single game. Our goal is to beat Germany."

The U.S. would have been talking less about Germany and more about another character-building comeback or its second-round opponent if midfielder Michael Bradley hadn't been stripped of the ball at midfield in the final minute. That set up the lightning counterattack that ended with Varela's tying goal.

It was an abrupt U-turn for a U.S. team that, 15 minutes earlier, appeared to have made history. When Clint Dempsey scored in the 81st minute, it put the Americans in front for the first time all night, and on the verge of qualifying for the knockout round of a World Cup after two games for the first time ever.

Nani had put Portugal up, 1-0, in the fifth minute — although he had a lot of help from U.S. defender Geoff Cameron, who got a foot but nothing else on a Miguel Veloso ball into the area. His weak clearance attempt bounced directly to a wide-open Nani near the right post.

Portugal nearly doubled that lead in the dying moments of the first half, with only the goal post and a remarkable one-handed save by keeper Tim Howard keeping it a one-goal game.

That proved huge when Jermaine Jones, who had his second spectacular game here, scored the equalizer midway through the second half.

After a corner kick was cleared from in front of the goal, Jones gathered the loose ball near the far side of the area and dribbled toward the center to escape the marking of Nani. With teammate DaMarcus Beasley shouting "Shoot! Shoot!" from behind, Jones then blasted a right-footed rocket from about 20 yards that bent into the net just inside the far post.

Then came Dempsey's goal, the second go-ahead goal the U.S. has scored in the final 10 minutes of regulation time in this World Cup. And though it didn't stand up as the winner, defender Matt Besler said the U.S. is still headed where it wants to go.

"We're all disappointed. We could taste the second round, we were right there," he said. "[But] we have four points from two games. We're in control of our own destiny.

"I think we like to do things the hard way. It's the American way."

[For the record: An earlier version of this article incorrectly stated that West Germany and Austria played to a draw in 1982.]