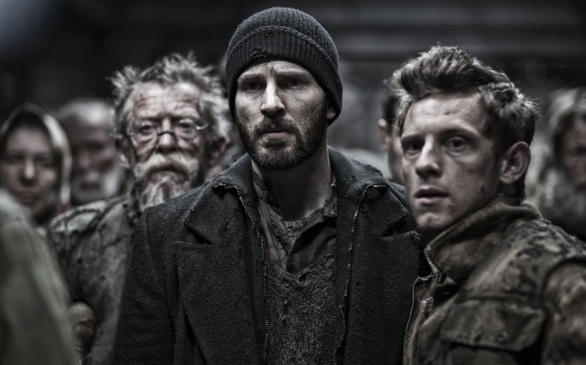 He's no Captain America in this film, but Chris Evans is a hero.
(Credit: Radius-TWC)

From start to finish, this movie is wild. Even though there are hints of Terminator and The Hunger Games, Snowpiercer is an original take on the sci-fi genre; it's a film we haven't seen before. Bong has done a great job presenting his vision of a post-apocalyptic future, all while living on a train.

Set in the future, Snowpiercer is a reference to the super train in which all mankind are currently living on.

After a global warming experiment went terribly wrong, Earth has become a frozen ecosystem where nothing can survive. Wilford (Ed Harris), who was once viewed as a freak, saw the apocalypse coming and built the train for survivors. In a very Darwinian fashion, the "haves" and the "have nots" are separated and relegated to the front and back of the train, with a revolt becoming imminent.

Evans takes the reigns not as your Captain America savior, but as a very real man named Curtis. He is trying to figure out how to help his fellow brethren who are stuck at the back of the train.

Curtis and his legion of followers—Edgar (Jamie Bell, Jumper), Tanya (Octavia Spencer, The Help) and Gilliam (John Hurt, Harry Potter)—vow to take the engine and control the train. Mason (Tilda Swinton) is brilliant as the train's enforcer, giving the revolt some very real opposition.

The cinematography is done so well that many times you can feel and see what the passengers are experiencing firsthand. There are wild shots of the exterior world that is now just an overgrown icicle. The bridges and tunnels offer new ways to bring terror, and there are some very graphic, violent scenes that happen with new forms of futuristic torture. Snowpiercer is not for the faint of heart.

This film may not be everyone’s cup of tea, but it is worth checking out once it hits theaters.