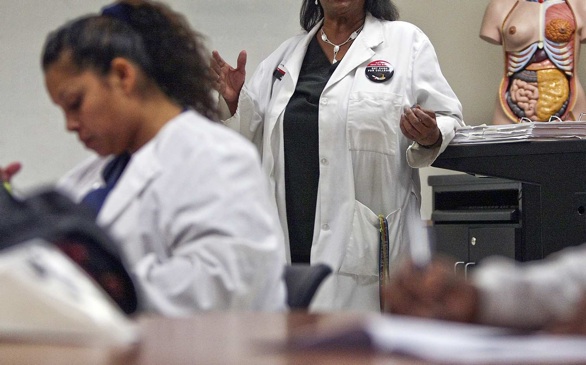 After twice failing to protect students from the false promises of expensive, for-profit career colleges, California is trying again.

A bill making its way through the Legislature would replace the state's regulatory bureau -- slammed as ineffective in a March state audit -- with an independent board to investigate complaints and monitor the schools.

Industry lobbyists and consumer advocates have staked out their positions. The schools view the proposed changes as unnecessarily disruptive, according to the bill's analysis, but the advocates say it could make the state more responsive to students left in the lurch.

Whatever the state sets up, "I hope that it's a little more user-friendly," said Megan Thompson, a former student who remains unemployed six months after completing a Boston Reed College online program in electronic health records.

The Milpitas woman said she is still awaiting a response to the complaint she filed early this year with the Bureau for Private Postsecondary Education.

She said the school charged students for textbooks they never received, gave them a job-board web address instead of promised career counseling and neglected to mail her certificate. (She has since obtained it.) The college appears to be open, but did not respond to requests for comment.

For-profit colleges, many of them national chains, have come under intense scrutiny for soaking up federal student aid and leaving former students jobless and in tremendous debt. A new report last week from the National Consumer Law Center gauged the "gathering storm" of investigations by state attorneys general and federal agencies: 61 since 2007 with a steady increase each year, including 13 through May of this year.

And Thursday, the California-based Corinthian Colleges warned that federal financial sanctions might force it out of business. Its schools include Heald, Everest and Wyotech, which enroll more than 70,000 students nationwide, many of them in California. The U.S. Department of Education said the company failed to address concerns about its practices, "including falsifying job placement data used in marketing claims to prospective students and allegations of altered grades and attendance."

Californians could benefit from having an independent board watching over the industry -- as long as those with ties to the colleges can't dominate its membership, she said.

The bill, which has an Assembly committee hearing scheduled on Tuesday, will bring "a higher level of scrutiny" to career colleges, said its co-sponsor, Assemblywoman Susan Bonilla, D-Concord. "The bill is very focused on better protections for students," said Bonilla, who heads the Assembly Committee on Business, Professions and Consumer Protection.

But it needs to be stronger, said a former California deputy attorney general. Margaret Reiter said that a major flaw in the bill is that its new regulations would expire in 2017, less than two years after the board would be set up, a timeline she called "laughable."

Even if the board's new regulations prove effective, their early expiration date opens them to being weakened or dismantled shortly after they take effect, said Reiter, who serves on the bureau's advisory panel.

California learned this the hard way in 2007, when then-Gov. Arnold Schwarzenegger vetoed a bill to extend its previous regulations. For the next three years, California's more than 1,000 unaccredited private schools -- many of them, for-profit businesses sustained by federal student aid money -- operated without state regulation.

The state agency that took its place in 2010 started with a large backlog of tasks, a tiny staff and a hiring freeze that put it further behind, Reiter said. The state audit this year found the bureau, just four years old, had "consistently failed" to guard against fraud and deception at the schools where technical and vocational training can cost more than $20,000 a year.

It noted the bureau took 502 days to complete a probe into a sham flight school.

Phoned requests for comment from the for-profit trade association, the California Association of Private Postsecondary Schools, were not returned.

One former trade school student said he hopes the state will protect low-income students from being duped, like he says he was, by promises of financial aid and high-paying jobs that did not materialize.

Oakland resident Pharis Pugh earned an electrician certificate last year at WyoTech in Fremont, but found no work in the field. The instruction was poor, he said, adding that he was misled by financial aid information when he enrolled.

He has stopped making his loan payments, which he says he can't afford, and has given up on a dream inspired two years ago by a television commercial.

"People like me that are down-and-out in Oakland, looking for a job, they're watching TV and they see that commercial that's like, 'You: Want to make some money?'" he said. "I would never do that again."