Tuition Financial Aid on the Way for Middle-Class California Families 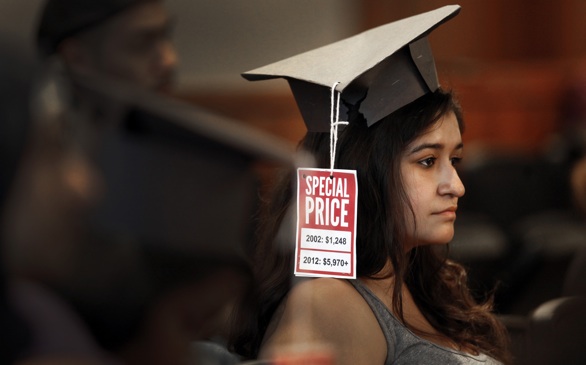 Some financial relief is in sight for thousands of middle-class students at California's public universities, under a new and unusual state program that will provide aid to families that earn up to $150,000 annually.

Over the next month or so, an estimated 156,000 undergraduates are scheduled to be notified that they will receive tuition grants for the academic year estimated to be as much as $1,450 for UC students and $650 for Cal State, with smaller amounts for more affluent families in the eligible range.

The assistance is an attempt to help middle-class families that earn more than $80,000 and typically aren't eligible for the federal and state grants that cover much or all of the tuition for lower-income students.

The awards are relatively low initially but could more than triple over the next three years and cover between 10% and 40% of UC and Cal State tuition on a sliding income scale by 2017 — if promised state funding comes through.

Yet even before the first awards, problems and uncertainties have arisen. Because of funding shortfalls, many students this year are expected to receive about $200 less than the plan originally called for, according to the California Student Aid Commission, which is administering it.

And despite publicity efforts, many students said they were unaware of the program or confused about why they have not been told the amount of their grant.

Incoming UCLA freshman Madison Acampora said she would be grateful for whatever she receives. Although she had won some small private scholarships, her family's $96,000 income made her ineligible for most government grants. At first, her parents plan to pay her expenses without loans even though they only recently finished paying college bills for two older daughters.

UCLA has told Acampora that she seems likely to receive one of the new grants, with details to come next month. "I became used to not getting any money. So this makes me very happy," said the El Cajon resident, "even if it just helps cover my books and supplies."

Lower-income families have been mainly protected from the steep rise in UC and Cal State fees during the recent recession, and more affluent families are able to pay full tuition, said John Vigna, spokesman for Assembly Speaker Emeritus John Pérez, who was the main force behind the program.

The new aid "targets middle-class students who have been squeezed the hardest by all these fee increases and had to take out higher student loan debts," he said.

In recent years, some wealthy private universities, including Harvard, Princeton and Stanford, have increased assistance to families making as much as $200,000 a year and replaced loans with grants. UC Berkeley and UC Davis have added some aid for families who make well above $100,000.

Many other states offer aid that rewards academic merit regardless of income. (UC and Cal State offer some of those.) Yet, California's middle-class scholarships are "groundbreaking" because they are so wide-reaching, don't focus on the best students and have a high income cap, said Frank Ballmann, director of federal relations for the National Assn. of State Student Grant and Aid Programs.

With all the political pressure to reduce student debt, he predicted that the new plan could become a national model. "Even if [California] is the first, I suspect they won't be the last," Ballmann said.

Critics say the program responds more to political pressures than to real needs, and they contend the money would be better spent to help lower-income students. Much of the alarm about student debt is based on other states, according to Debbie Cochrane, research director for the Institute for College Access & Success.

Only about half of recent college graduates in California took on student debt, and their totals average about $20,000, compared with the $30,000 average owed by about three-quarters of graduates nationwide, according to the group.

The new program "misunderstands the problem," Cochrane said. "All the data continues to show the real affordability problem is among the low-income students."

Additionally, she and others note that the middle-class scholarships, unlike most other aid, do not count families' assets such as stocks or real estate investments beyond the family home. So some families with high resources may be eligible, which opponents say is an unwise use of tax money.

On the other hand, Christopher Carter, UC's student financial support director, said recent reports show that a higher proportion of UC students from families in the $100,000 to $150,000 range are taking education loans, and the size of their average debt is growing.

He said it is too soon to say whether the new grants will reduce loans and also encourage more students to attend the university, but he said "our hope is that these awards are going to make it easier for students and their families to afford an education."

Students generally do not have to apply specifically for the new aid, but they need to have submitted the Free Application for Federal Student Aid (FAFSA) by March to be automatically considered. If they didn't, it is too late for the upcoming school year.

Some middle-class families skip the FAFSA, wrongly assuming that they are eligible only for loans, said Diana Fuentes-Michel, executive director of the Student Aid Commission. She said she expects that more will complete the form next year as word spreads about the scholarships.

"I think this changes the messages about financial aid. Everybody needs to fill out the FAFSA and get consideration," Fuentes-Michel said.

She attributed the notification delays to the program's infancy and delays in legislative action and enrollment statistics. She said students will be told earlier next year.

Yet even as officials say they want more families involved, they also concede that more applicants may cause complications. An effort in the Legislature to add $20 million to this year's $107-million appropriation failed this month.

The aid commission is projecting that the grants will be about 15% less than initially expected. Analysts say the spending could face annual political battles, including efforts to curtail eligibility.

Among those hoping to hear some good news soon is Disha Banik, a political science major from San Jose entering her third year at UC Berkeley. She said she was rejected for financial aid in the past but expects that her family's income of about $100,000 will make her eligible for the new program.

Her family has felt "a level of financial stress in paying for college," Banik said. "I don't mean to take away from the struggles for low-income families, but I think a lot of the costs are falling on the middle class."