Pac-12 Players Have Lots of Pro-tential in Draft 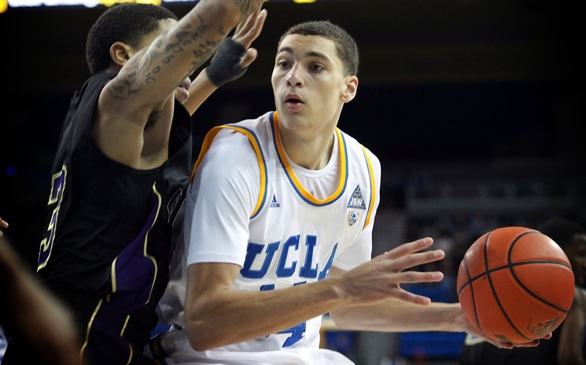 There is a point at which production and projection meet, and it might just be this week in New York City. That’s where a select group of Pac-12 players will hope to be selections in the NBA draft, with teams either choosing them for what they’ve done, or what they might do. In some cases, the latter reigns. See: Gordon, Aaron and Lavine, Zach.

Heck, Lavine is projected to go about a dozen picks ahead of teammate Kyle Anderson, who outscored him by five, out-rebounded him by six and out-assisted him by five. Come Thursday, that won’t matter much to NBA executives who are wooed by Lavine’s athleticism. So, too, Gordon, whose potential has teams salivating, an athletic wunderkind unseen in the Pac-12 in years.

But then there are those for whom the past is an indication of things to come, guys like Jordan Adams and C.J. Wilcox. The cream of the conference crop filled up the stat sheets in 2013-14, and scouts and general managers had plenty of impressive tape to pore over.

Here’s a look at five Pac-12 first-round hopefuls, and a handful of others who could hear their names selected this week:

Prolific: Leaper. Likened to Blake Griffin, Gordon is a highlights package unto himself. Gordon is the ideal oop to a good young guard’s alley-, and he certainly opened some eyes with a terrific freshman season with the Wildcats.

Pro-tential: A few All-Star selections, and at least one Slam Dunk appearance.

Prolific: Athlete. LaVine has been compared to Russell Westbrook, and while the comparison is kind, he does have similar athleticism. He absolutely wowed at the combine.

Pro-tential: Could be a star if he develops at a consistent pace, could be too frail to compete at the next level. Classic hit-or-miss.

Prolific: Scorer. Adams has expanded his game since arriving at UCLA, when he was simply a good shooter with a smart release. Now he threatens to get to the basket on every play and can take defenders off the dribble.

Pro-tential: A solid bench player, particularly in scoring situations. Like the NFL, the NBA has become ultra-specific, and one major ability – in Adams’ case, the simple-yet-significant ability to put the ball in the basket – earns major minutes.

Prolific: Passer. Anderson did a lot of things well for the Bruins last season, and his stat line was among the best in college basketball. But for a towering, 6-foot-8-inch question mark, his passing ability truly makes him stand out.

Pro-tential: Starter, but needs a forward-thinking coach. Anderson is easily the most intriguing player in the draft, as he could end up a once-in-a-decade kind of player. No player in the draft pairs his size and guard skills, but his defensive prowess and potential assignment are tough reads.

Prolific: Scorer. Wilcox was wonderfully consistent and consistently improved, and he might have shown enough offense to bump up to the first round.

Prolific: Creator. He knows how to shoot, drive and pass. With ample size, he’s a terror on offense.

Pro-tential: Starter or bust. Dinwiddie tore his ACL last year, so questions remain about his health. Had he stayed a year, he likely would’ve been a first-round pick.

Prolific: Worker. Powell was not the most athletic big man in the conference, but he was savvy and feisty. He works his way around the basket, and he’s a talented rebounder.

Pro-tential: Bench player, but a versatile one.

Prolific: Defender. Richard Sherman, but without the attitude. Johnson was the heart and soul to the UA defense.

Pro-tential: Bench player, but a tenacious one.

Prolific: Scorer. The dude can create, from just about anywhere on the court.

Pro-tential: Bench player, but like Bobby “Action” Jackson, a former sixth-man star for the Kings.

Prolific: Defender. Simply, a tree. He’s going to alter your shot and mood.

Pro-tential: Bench player, but with a unique skill.