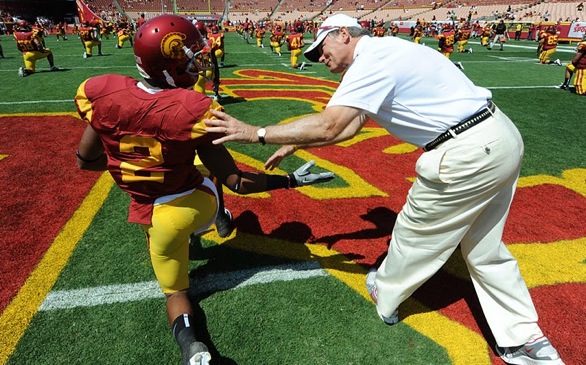 Starting on July 1, athletes who earned a  scholarship in these three sports will not have their scholarships pulled because of poor performance on the field (or court) or because of a pissed-off coach, reports the Orange County Register. The scholarships will last for four academic years.

As long as players make the grades and don't get into trouble off the field, their scholarships are guaranteed.

Andrew Zimbalist, an economics professor at Smith College, told the Register this a competitive advantage for USC. "It’s done to get a competitive edge, and it does provide a very modest, incremental gain to the students," he said.

And national recruiting analyst Greg Biggins told the publication the university's move to publicize this was genius. "Other schools were doing it but not publicizing it," he said. "Now it looks like USC is the first. From a parent’s standpoint, now you have security for your kid.”

Prior to this new policy, USC offered one-year renewable scholarships to its student-athletes.

Of course, this is great news for players on these three teams, but what about other Trojan athletes who play track and field, water polo, baseball, etc.? Since USC classified the football and basketball teams as "revenue sports,"  we're assuming that the Trojans playing the "non-revenue sports" will not be included in the new policy—unless, of course, they start bringing in more money.