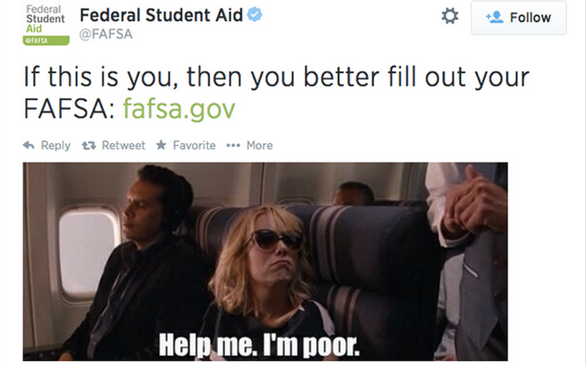 The Financial Student Aid Agency (FAFSA) offended people by posting a tweet with a photo of a scene of Kristen Wiig on a plane from the movie Bridesmaids with the words “Help me. I’m poor.” The tweet itself said, “If this is you, then you better fill out your FAFSA” (via NBC News).

The tweet was deleted an hour after it was posted, and an apology tweet was sent saying, “We apologize for the insensitivity of our previous tweet. Our goal is to make college a reality for all. We’re very sorry.”

FAFSA is a federal agency that determines grants, loans and work-study for students every year, and the deadline for submitting forms is midnight (Central Time) June 30.

People clearly expect a certain level of maturity and professionalism from such an agency. So, it’s only expected that a mass outrage would spread like wildfire across the Internet.

On the other hand, the Internet is known for blowing things out of proportion. It’s clear that the harmless tweet was meant to lighten the tone of the most stressful aspect of attending college: filling out FAFSA forms.

But still, a serious agency should not be making jokes at the poor.

What do you think about FAFSA's tweet? Leave your comments below!