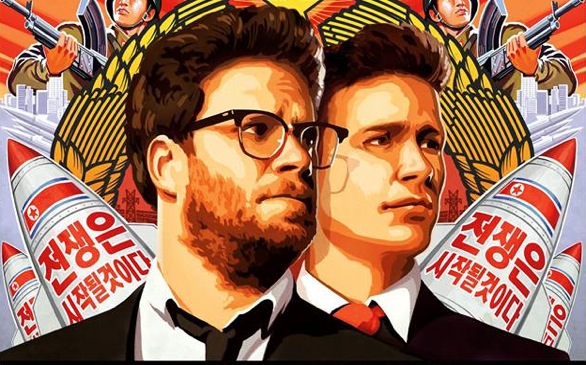 Hollywood funny men James Franco and Seth Rogen are known for their hilarious satirical movies such as This Is the End and Pineapple Express, but who would have imagined that one of their movies would be considered an “act of war?”

An unknown spokesman for North Korea’s Ministry of Foreign Affairs reportedly said in a statement, “If the United States administration tacitly approves or supports the release of this film, we will take decisive and merciless countermeasure.” However, it's unclear what that "countermeasure" might be.

Business Insider reports a North Korean foreign ministry spokesman said, “Making and releasing a movie on a plot to hurt our top-level leadership is the most blatant act of terrorism and war and will absolutely not be tolerated.”

In the film, Franco is a talk show host, and Rogen is his producer. The two set out for an interview with the highly revered Jong-un, but they end up being recruited by the CIA to assassinate him.

We assumed that maybe there was a very slight possibility Jong-un might be a little more open-minded about this film. After all, according to Insider, he’s “believed to be a fan of American culture and oversaw the staging of a show featuring popular U.S. folklore.”

But, of course, that was wishful thinking.

Wednesday morning, Rogen posted a tweet in response to this situation that read, “People don’t usually wanna kill me for one of my movies until after they’ve paid 12 bucks for it. Hiyooooo!!!”

It seems that this controversy isn't worrying the actors or the U.S. At least, not yet.

The Interview is scheduled to release in October.

Blog
RSVP for screenings of The Phantom of the Open in NYC and L.A. on June 4th and 5th
821 views

Blog
Ray Liotta, star of ‘Goodfellas and ‘Field of Dreams,’ dies at 67
665 views

Blog
"Breaking Bread" screening at Q&A at the Skirball Cultural Center on Wednesday, May 4
604 views