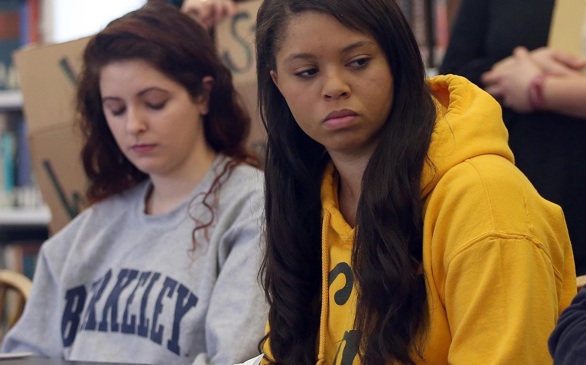 The audit examined sexual violence at the University of California, Berkeley, among others.
(Credit: Jane Tyska/Bay Area News Group/MCT)

California’s public universities do not ensure that all employees are sufficiently trained to handle incidents of sexual violence, especially those whom students may turn to first for help, according to a state audit released Tuesday.

While key staff members who handle complaints of sexual harassment and assault receive adequate training, state Auditor Elaine Howle said in the report, others who may be the first point of contact for a student, such as resident advisers and athletic coaches, are not prepared to respond to these incidents and risk mishandling them.

“When they are not sufficiently trained, employees may not know how to interact appropriately with students in these situations and may do something that would discourage students from engaging in the reporting process,” the report stated.

The issue of sexual violence on college campuses has gained national attention as students at dozens of universities have filed federal complaints that their institutions mishandled cases of harassment and assault. In May, the U.S. Department of Education released a list of 55 universities that it is investigating, including UC Berkeley.

The audit included a survey of 208 students, and 22 percent said they were not aware of resources available should they or someone they know experience sexual harassment or sexual violence. State law requires all CSU schools and requests that UC campuses provide educational and preventive information about sexual violence to incoming students during campus orientation, but does not specify when this must occur.

The report recommended that universities provide this training as soon after students arrive on campus as possible, “as they may be the most vulnerable to experiencing an incident of sexual harassment or sexual violence in their first weeks on campus,” and then provide periodic refresher training at least annually.

In a written response, CSU Chancellor Timothy P. White said he would work with the system’s 23 campuses to implement the recommendations of the audit. “Because some of the recommendations pertain to faculty and staff represented by unions, training requirements related to those groups will need to go through the collective bargaining process,” he added.

UC President Janet Napolitano said in a written response that the university would evaluate the report’s recommendations in the coming weeks and continue to develop practices to address the issues it identified.

Campus News
USC offers free tuition to families making under $80,000 and a break for homeowners
63 views