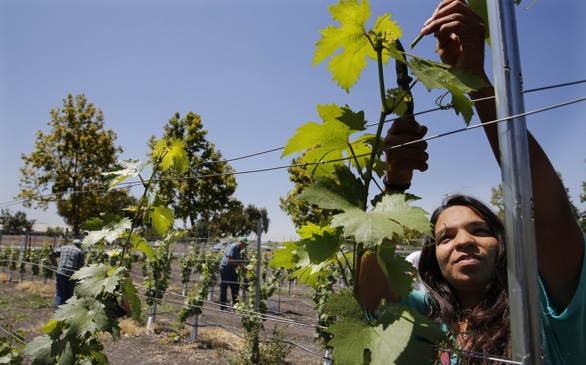 LOS ANGELES — On what she expects will be the “most exciting day of her life” next month, Jaclyn Cubillas will probably be working on a lush Northern California vineyard, surrounded by grapes destined to become fine Syrah and Zinfandel.

On that day, the University of California, Davis, undergraduate will turn 21 and she will “finally be able to do more than sniff” the wines produced by the school’s premier viticulture and enology program.

California has long been among the world’s leading wine producers and well regarded for its academic programs that teach the science and art of growing grapes and making wine.

But it trails New York, Colorado, Florida and Vermont, among others, in one key aspect of the business: College students taking courses in wine production and beer brewing are unable to taste the alcoholic beverages until they are 21, the legal drinking age.

That could change under legislation that would lift the underage ban for students enrolled in tasting courses that are required for an associate’s or bachelor’s degree.

Dubbed the “sip and spit” bill, the measure passed a key Senate panel Tuesday and is headed for the Senate floor. It passed the Assembly in May. It would allow students to taste — but not swallow — alcoholic beverages under the supervision of instructors.

Educators say that the current restriction hinders the ability of students to gain firsthand knowledge of the beverages until near the end of their academic studies — and in some cases that prohibition keeps them from graduating on time.

“By not being able to taste, they miss a huge part of the experience of learning. … They do pick it up, but usually on the job as an intern after they graduate,” said Andrew Waterhouse, a UC Davis professor of enology who led the legislation.

The age restriction prompted UC Davis to move courses that require tasting to students’ senior year so that more of them meet the age requirement.

“That’s completely backward,” Waterhouse said. “We should be teaching those upfront.”

Tasting was removed altogether from the wine production course in fairness to those younger than 21 who can’t participate. The classroom sensory experience is left only to smell, Waterhouse said.

UC and Cal State have endorsed the legislation, which has encountered virtually no formal opposition.

The California community colleges have adopted no position, “but it sounds reasonable to allow underage students in wine-making programs to taste but not consume the fruits of their labor,” spokesman Paul Feist said.

It is somewhat surprising that California trails a dozen other states in crafting an underage drinking exemption for educational purposes, said Adrian Lopez, director of state government relations for the Davis campus. Lopez conducted research and developed language for the legislation.

“Washington and New York have had laws on the books for a long time, so it’s a competitive disadvantage issue as well,” Lopez said.

UC Davis student Jean-Sebastien Calvet’s family has been in the wine business for decades in the Bordeaux region of France. He said that waiting to take courses that involve tasting is a shortcoming for students such as himself.

“I have friends who study in France, Brazil and different European countries, and there is an advantage they have in going into the wineries, getting into the fields,” said Calvet, 22. “Part of being a winemaker is being able to taste and distinguish certain aromas and varieties, and they have an early start.”

Those younger than 21 also can’t attend departmental parties where wine is served or go on trips to wine-producing regions, Cubillas said. She said she will have to attend a fifth year of college to take all of the courses she needs for her degree.

“It’s not just the classes but the whole learning experience, like interning at a winery, that being under 21 you can’t be a part of,” said Cubillas, who said she has tried to make up some ground by working the late summer, early fall harvest and doing cleanup work after events. “To have a sense of community with your cohort, you have to do a little more footwork.”

Underage drinking remains a major public health issue, said Ralph Hingson, director of the Division of Epidemiology and Prevention Research for the National Institute on Alcohol Abuse and Alcoholism.

He said he knows of no studies to assess the impact of the education exemptions in other states.

“But an issue of far more importance is many parents thinking it’s a good idea to provide alcohol under supervision, thinking young people will learn to drink more responsibly, but studies show that it sends the wrong signal and they are likely to start drinking earlier,” he said.

It’s uncertain if the college would modify its curriculum even if the legislation becomes law, he said.

“It puts a lot of burden on instructors because most students do typically swallow, although they’re encouraged not to consume a lot,” Murphy said. “If you have a class of 25 students tasting, it’s hard to monitor.”

Further, he asked: “Would there be a legal issue of getting in trouble if someone does swallow?”

Classes are not social gatherings and reflect the actual experience of professionals — who taste and spit, they said.

“When it’s in an environment as structured as the classroom, it demystifies alcohol in a lot of ways,” said Margie Ferree Jones, a well-known wine educator who is an associate professor in the Collins College of Hospitality Management at Cal Poly Pomona. “We teach to appreciate that it’s a food as well as a drug. We cover alcohol and the law, healthy drinking and what is a proper portion.”

Aric Attebery, who turned 21 in May, majors in hospitality management at Cal Poly Pomona.

He hopes to work in the restaurant industry and has already cooked in some of the area’s fine establishments.

Attebery said he has had to wait to take a sommelier exam, but he has already taken a course in Italy on food and wine pairing so as not to lose too much ground.

“I think changing the law would be fantastic,” he said, “and will do great things to help students get through their education earlier.”