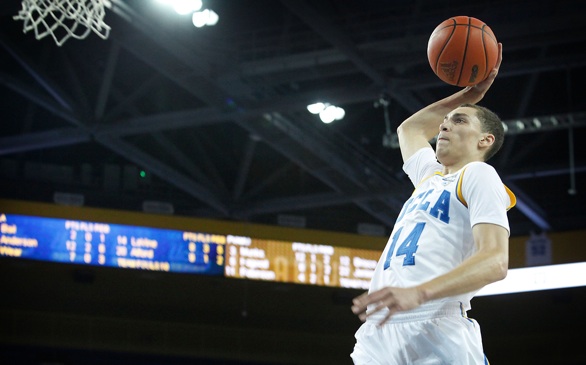 Shortly before he flew toward his professional future Tuesday afternoon, UCLA’s most exciting prospect pulled out his phone and tapped away.

“Off to NYC to make dreams reality,” Zach LaVine tweeted.

So ends the journey of this NBA draft’s most polarizing player, a 6-foot-5 combo guard who — depending on who you ask — is either a foolhardy kid who drums up too much hype, or the best thing since Russell Westbrook. To some extent, this debate has raged since he announced to go pro less than 24 hours after UCLA’s Sweet 16 loss to Florida.

Back then, the national backlash erupted quickly.

Sports Illustrated’s Seth Davis: “Amazing to me that UCLA’s Zach LaVine thinks he’s ready for the NBA, not 24 hrs after losing. He’s not even a decent college player yet.” The 19-year-old averaged 9.4 points, 2.5 rebounds and 1.8 assists, and only started one game as a freshman.

ESPN’s Jeff Goodman: “Zach LaVine would look really good in a Maine Red Claws uniform next season.” The Red Claws are a D-League affiliate of the Boston Celtics and — perhaps more pointedly in this usage — have an appropriately minor-league logo in its athropomorphized lobster.

And yet, here he is. The one who wasn’t even “a decent college player,” who “couldn’t have a major impact” when it counted, who’s better off in Portland — the Portland that lacks a professional basketball team. Of the three Bruins vying to start their careers on Thursday, LaVine is the one who has inspired the most wide-eyed jaw drops.

Three UCLA players might go in the first round of the NBA draft, something that hasn’t happened since David Greenwood, Roy Hamilton and Brad Holland went second, 10th and 14th in 1979. But though Jordan Adams and Kyle Anderson were the stars of Steve Alford’s first year in Los Angeles, LaVine is the only one invited to the green room. There, he will wait with 19 other prospects before walking across the Barclays Center stage and shaking hands with NBA commissioner Adam Silver.

An placed LaVine’s draft position at 14.67, right around the Phoenix Suns’ 14th pick. The Suns have three first-round selections, and boast the type of young coach (Jeff Hornacek) and established backcourt (Eric Bledsoe, Goran Dragic) that could allow LaVine time to develop and thrive. In an interview with ESPN’s Andy Katz, LaVine himself predicted landing in Arizona.

UCLA’s other two names could very well go on to great careers, but aren’t as highly regarded. Anderson, arguably the Pac-12’s best player, averaged out at 20.78 across the nine mock drafts. Adams led UCLA in scoring, but was left off three mock drafts entirely; of the other six, he averaged out at 25.67.

LaVine’s ascension from UCLA sixth man to potential lottery pick is, in retrospect, not entirely surprising. He and his father both knew back when he declared for the draft in March that his skills were well-suited for the NBA workout circuit, where scouts would salivate over his athleticism and potential. LaVine was the only player at last month’s combine to place in the top 10 in all five strength and agility drills, including a remarkable 41.5-inch max vertical.

Three weeks ago, he bested himself with a to set a Lakers workout record.

“I’ve gone higher than that before, but, yeah,” he told reporters afterward. “I think I was pumped a little bit. You know, the Lakers.”

The Lakers, who picks seventh, invited him back for another workout last Saturday.