US Soccer Team Advances at World Cup, Loses to Germany, 1-0 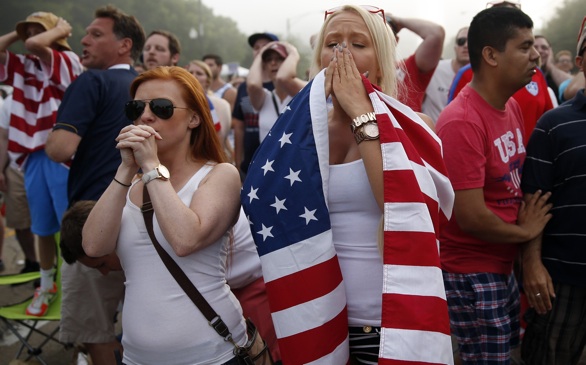 RECIFE, Brazil — The U.S. may have lost a game Thursday. But it won both a huge amount of respect and a spot in the World Cup’s second round despite dropping a 1-0 decision to Germany in the group-play final for both teams.

In a game marred by rain and a soggy turf, the U.S. stayed close enough to the world’s No. 2 team to finish second in its group, allowing it to advance to meet the winner of Group H in the knockout round on July 1 in Salvador. The final Group H standings were to be determined in Thursday’s late games between South Korea and Belgium and Algeria and Russia. Belgium held a three-point over Algeria heading into those games.

This marks the third time in four World Cups that the U.S. has advanced beyond the group stage. Powerhouse Germany, meanwhile, has reached the semifinals in six of the last eight World Cups.

The only score Germany would need to win the group came in the 55th minute. U.S. keeper Tim Howard made a spectacular diving save on a shot by Per Mertesacker only to see the rebound bounce out to an unmarked Thomas Mueller at the edge of the 18-yard box. From there Mueller bent a right-footed shot just inside the far post for his third goal in as many games.

The U.S. pushed for the tying goal in stoppage time but Alejandro Bedoya’s open shot was stopped by a sliding German defender and second later a Clint Dempsey head went over the net by inches.

Germany and the U.S., tied for the group lead coming in, started the game in heavy rains, assured they would both avoid elimination simply by playing to a draw. The winner, however, would claim the group title and Germany, as promised, pushed for that from the start.

The Americans, needing only to protect a slim lead over Ghana in goal differential – the first tiebreaker to would determine who would go home in the case of a U.S. loss and a Ghana win—were far more conservative, primarily chasing and defending and basically ignoring German goalkeeper Manuel Neuer.

As it turned out, the tiebreaker never came into play since Portugal rallied to beat Ghana, 2-1, on a goal by Cristiano Ronaldo. But that game was played concurrently with the U.S.-Germany contest so the U.S. couldn’t take any chances.

The Americans were even conservative in their lineup selections, replacing snake-bit central defender Geoff Cameron with the Los Angeles Galaxy’s Omar Gonzalez and starting Brad Davis in midfield over Alejandro Bedoya, who played in the first two games.

Predictably Germany had the first good chance, in the eighth minute, when Lukas Podolski slipped a short cross toward the net. But Mueller, charging toward the near post, slid across the damp grass and arrived a half-step too late to knock the ball home.

Seconds later a missed clearance by Gonzalez left an unattended ball in the box. But no German was close enough to take advantage.

Gonzalez more than made up for that mistake in the opening moments of the second half when he took a Jerome Boateng cross off the end of Mesut Ozil and deflected it over the crossbar, likely saving a goal.

Germany never stopped pushing, though. In fact, the Germans were so dominate through the first 20 minutes they had a 2 to 1 lead in time of possession and had completed 99 more passes than the Americans.

They had to wait until early in the second half to get the goal they were pushing for though and that proved to be just enough for Germany to win — but not enough to keep the U.S. out of the second round as well.