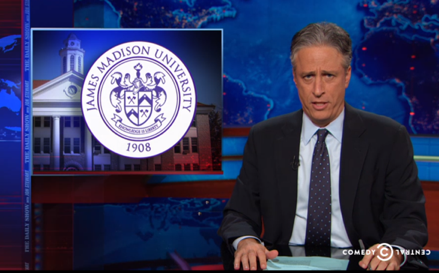 If you have been keeping up with the news, you may have heard that currently 55 colleges—although numbers could keep increasing—are under investigation due to their handling of sexual assault cases. One of these colleges is James Madison University, which came under fire after giving the punishment of “expulsion after graduation” to three students accused of sexual assault.

Like with any other news show, the “The Daily Show” responded, expressing the growing frustration over these unjust, upsetting rulings and the growing concern with safety on campuses, especially for females. In the video, Jon Stewart discusses the absurdity of the ruling but soon leaves the floor to correspondents Jessica Williams and Jordan Klepper. Klepper and Williams appear to be portraying upperclassmen that are giving advice on how to have fun in college.

Klepper begins by giving the typical “bro tips” such as “beer before liquor, never sicker” and other advice many are probably familiar with. However, for every “bro tip” Klepper gives, Williams has a much more serious and intense one. In fact, all of Williams' tips advise girls on what they need to watch out for when they attend a college party in order to avoid rape or any other form of sexual assault. Her advice ranges from going by her slogan, “Don’t be a doofie, watch out for a roofie” to how to creatively use the buddy system.

Towards the end, Klepper finally reacts to Williams’ advice and asks if this is really how women have to live every day. While many might have a similar reaction to his and think that Williams was being a bit over the top, probably for entertainment value, the truth is she was not exaggerating—we have come to a point where not even schools are considered a safe-haven any more.

With the investigations underway, we can only hope the number of sexual assaults on campuses decreases and colleges will do a better job at reporting them and punishing assailants.