My First Time at EDC Las Vegas: A Once in a Lifetime Experience I’ll Never...Repeat 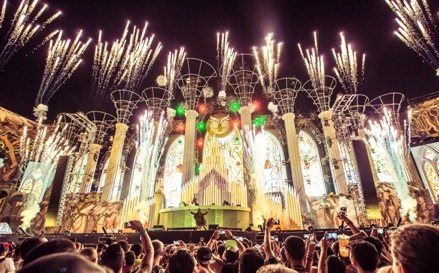 When I bought my pre-sale tickets for the Electric Daisy Carnival (EDC) in Las Vegas, I admit I was a little nervous. The thought of dancing to EDM for three nights straight in the Vegas heat just seemed like it could be a little too much. Well, I got over my nerves and finally went to EDC on the weekend of June 20-23. I can say that it was really like no other rave or music festival I’ve been to before.

But, spending three nights under the electric sky is an experience I’d only like to have once in my life.

The Venue
Although it took about an hour or more to find parking and get through a ridiculously long security line every day, walking into EDC was kind of like walking into an adult playground. Filled with 35 twinkling carnival rides and seven stages with bright and flashing colorful lights, the festival was one of the most visually pleasing events I’ve ever gone to. It’s a kind of festival where pictures cannot really capture what is really there.

Compared to other big music festivals like Coachella, EDC definitely seemed to have a lot more effort put into its design. Although the giant floating astronaut at Coachella was really cool, EDC’s visuals and art installations transformed the racetrack into a real-life version of some kind of a hallucinogenic trip. There were huge mushrooms in the air, trippy-looking huts with young adults in neon sitting underneath them, a random gigantic caterpillar that lit up and a larger-than-life owl that moved throughout the crowds of ravers rocking pasties and furry hats.

The Stages
Not only were there colorful and creative art installations, the stages also added to the amazing visual experience. The kineticFIELD—the main stage—was an area that had enough room for literally thousands of people. Looking up at it made me feel as if I was inside of a scene from Alice in Wonderland or the Wizard of Oz. There were two enormous owls with their wings spread apart and heads to the side framing the main screens above the DJ table and something that looked like the castle in Emerald City. At certain points in every performance, water spouted out of fountains and created a kind of water show, while dancers in crazy costumes danced along the stage and fireworks shot into the sky.

Another memorable stage was the bassCON. In the shape of a huge brown monster with fangs and creepy eyes, it was pretty terrifying to look at, but creative and innovative.

The stage circuitGROUNDS, where big DJs like Calvin Harris, Tommy Trash and Avicii performed, kind of resembled a brightly lit dome with moving screens coming down from the ceiling. The only downfall was that inside, it was too small of a tent for the number of people that wanted to enter.

The Music
Overall, the number of DJs that performed was extraordinary (there were more than 200). But, by the half of the second night, all of the music just blurred together and sounded the same. Although there were big-name DJs that were headlining, the music just sounded a little too mainstream and repetitive. So, when many of the DJs remixed the same songs, I definitely had multiple moments where I thought, “Hey, didn’t I already hear this song three times tonight?” EDC is definitely in need of more variety in the future.

With that being said, some notable performances were Diplo, Branchez, Clockwork, Kaskade, Alesso, Paul Oakenfold, and GTA, which were mostly on the stage hosted by HARD presents. I know Insomniac is doing it big with EDC and other large EDM events, but it seems like they can maybe learn from HARD about adding more variety.

The Crowd
The people that attended EDC were full of positive vibes. I’ve heard some sketchy stories about pick pocketers in the past, but this year the crowd seemed like a great group of people. Everyone was full of energy and pretty giving with their candy bracelets.

However, the festival was way too crowded. Waiting in long lines to refill my water bottle, buying merchandise and moving from stage to stage—there were just way too many people. Although I met some friendly people, it was sometimes hard to enjoy certain moments because I had to constantly move out of the way for people to get past me.