Zach LaVine is Living His Dream 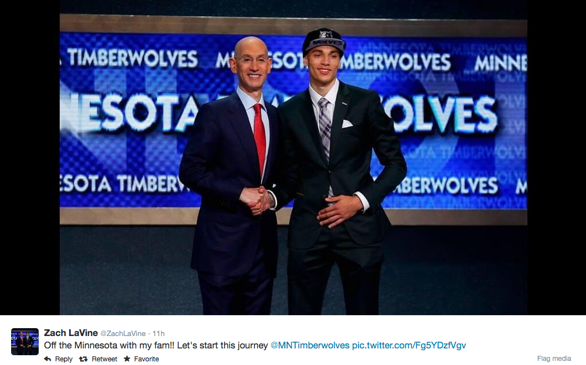 Wrote LaVine, "Off the Minnesota with my fam!! Let's start this journey @MNTimberwolves."
(Credit: Twitter screenshot)

(The Seattle Times/MCT) SEATTLE — Look at Zach LaVine now, emotions overflowing, lips moving though he’s talking to no one.

The skinny kid from Bothell High School, who was just a 140-pound scoring machine seemingly 10 minutes ago, is an NBA player. And not just any NBA player—a lottery pick. When the Minnesota Timberwolves took LaVine with the 13th overall pick in Thursday’s draft, he fought back tears, whispered to himself and completed a meteoric rise by taking the stage at the Barclays Center in Brooklyn and shaking NBA commissioner Adam Silver’s hand.

“I can’t believe this is happening,” LaVine said from New York. “I’ve been waiting for this my whole life. I saw the cameras come over, but it was just like a rush of emotions still. I had to put my head down.

“I’m on cloud nine right now. I’m really just trying to take it in. I had a rush of emotion. It still ain’t sunk in yet.”

Has it sunk in for anybody? It’s not the fact that LaVine is in the league. If you ever saw him at Bothell swishing long jumpers practically from the team bus and then finishing at the rim on the next possession, you knew he had NBA talent. But a one-and-done lottery pick? It wasn’t until recently that the idea seemed plausible.

LaVine is living out his dream at lightning speed.

He played one season at UCLA and averaged just 9.4 points on a balanced team, but the NBA draft is about potential, and few prospects this year can match LaVine’s promise.

He has advanced from a great athlete to a freakish one, with a vertical leap reportedly measured at an insane 46 inches and with the speed and flexibility to complement it.

If LaVine develops fully, he will possess the kind of ability that only a handful of basketball players are lucky enough to have. He could be the ultimate combo guard. But despite how far as he has come in such a short time, he’ll have an even greater challenge progressing from scintillating prospect to dependable pro.

LaVine gets to skip a few steps in his development because Minnesota couldn’t resist taking a gamble. It’s likely that LaVine will need a year before he’s ready to contribute on a consistent basis. But if you take that as reason to believe LaVine should’ve stayed in school, you’re mistaken.

LaVine played the game properly. And getting drafted in the NBA now is a game, a ridiculous one, in which teams shun how young the league has become in one breath and then scrutinize players who don’t have a gigantic upside in another. The way the system is, a player’s smartest business decision is to leave as soon as he is considered a solid first rounder. Otherwise, you risk falling out of favor, even as you improve.

There’s an odd logic to all of this, but that’s how you make the system work for you. Both college basketball and the NBA would be better with, at least, a 20-year-old age limit, but as long as this 19-year-old limit persists, the one-and-done kid will be the flavor of every draft.

There’s a huge difference between getting drafted and becoming a real NBA player, however. That process begins in earnest for LaVine.

He has been labeled as raw, even though parts of his game seem quite smooth. But there’s so much nuance left for LaVine to master before he becomes the scoring machine who thrived in Ron Bollinger’s free-flowing offense at Bothell. It should help LaVine’s development that he’s playing for an up-tempo team. The Timberwolves will be in rebuilding mode if they grant Kevin Love’s wish to be traded, but they’ll still be a fast-paced team with Ricky Rubio running the point.

LaVine needs to continue to work on his body, ball-handling, decision making, defense and overall consistency. But he enters the NBA as a player capable of making open shots from day one, and in transition, he’ll be a highlight reel. He called himself an NBA-ready “bucket getter” in an interview with NBCSports.com earlier in the week.

The Seattle area is quite good at producing those types.

“There are so many players that have been brought up,” LaVine said. “So many players in the league. It’s incredible. Seattle is the underground for basketball, I feel like.”

LaVine is part of the legacy now. If he can grow into his enormous game, that underground will come closer to the surface.