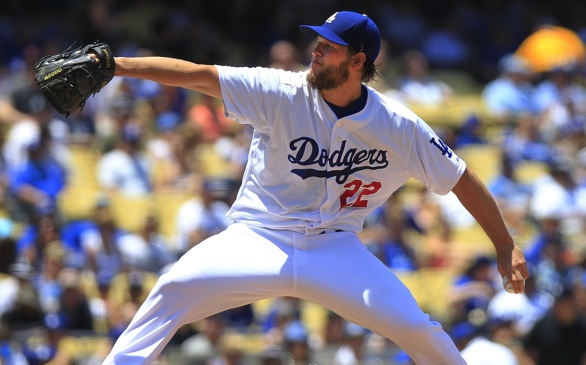 (LOS ANGELES TIMES/MCT) Clayton Kershaw delivered the kind of performance Sunday that turned the Dodgers' ascension to first place into an afterthought.

Kershaw pitched seven innings in a 6-0 victory over the St. Louis Cardinals at Dodger Stadium, dominating in a fashion that made first baseman Adrian Gonzalez wonder if the game has become too easy for him.

"Baseball's boring for him, I think," Gonzalez joked.

Kershaw moved the Dodgers into a virtual tie for first place with the San Francisco Giants in the National League West by limiting the Cardinals to five hits and two walks. He struck out 13. He won his sixth consecutive start and extended his scoreless streak to 28 innings, the longest such run in a career that includes two Cy Young Awards.

Imagining himself retired, Andre Ethier pondered how he would remember playing behind Kershaw.

"I'll look at it and probably say, 'I can't believe I got a chance to play with that guy and be his teammate,'" Ethier said.

Predictably, Kershaw didn't have much to say about himself.

He struck out 61 batters in 44 innings this month. Why was he striking out so many batters?

Told his curveball looks sharper now than it did earlier in the season, Kershaw smiled and said, "I was just sick of you guys asking about it."

He was more forthcoming when talking about how the Dodgers erased a 9 1/2-game deficit to the Giants in only 21 days.

"Coming back and tying up the Giants in a month is not something we expected," he said.

Kershaw was encouraged by the form of the entire rotation, which has set a modern-day record. Dodgers starting pitchers have walked two or fewer batters in 33 consecutive games, the longest streak in the National League since at least 1914, according to Stats LLC.

"The rotation, it just sets the tone for the whole team," Kershaw said. "If your starters are going deep into games, it sets up the bullpen to do their jobs. From there, if you're having quick innings and getting the guys off the field, they're going to score runs for you. It's just kind of a domino effect."

He also was pleased with what he viewed as the increased versatility of the team's offense.

"We're been scoring in a lot of different ways," he said. "That's the sign of a good team."

As the Dodgers have scaled up the standings, they have started to become more playful.

While outfielder Scott Van Slyke watched the game Sunday from the dugout railing, Josh Beckett used gum to attach a small bundle of matches to his cleats.

Gonzalez did and players laughed as Van Slyke looked around for the source of a strange smell.

"When you start winning, you're allowed to do more things," Gonzalez said. "When you're losing, you can't really have too much fun, you have to keep it a little more serious."

As Van Slyke recalled the incident later, he was repeatedly interrupted by a mischievous Beckett.

"His future's so bright, he has to wear sunglasses all the time," Beckett called out.

Van Slyke glanced over at Beckett and deadpanned, "Yeah, it's more fun. Even the guys that don't know how to have fun have fun."