Boyhood Captures Fictional Family Growing Up in Real Time: The film follows the actors for more than a decade. 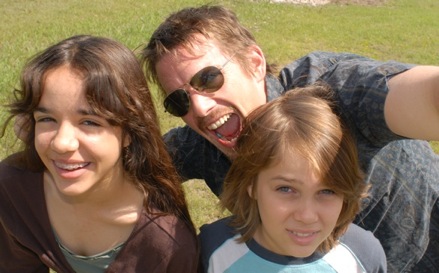 “It’s an elusive part of existence, growing up.” – Ellar Coltrane

Six-year-old Ellar Coltrane, who agreed to be filmed over a 12-year period in what seemed to be an impossible cinematic endeavor, wasn’t quite mature enough to grasp what he was getting into when he shook cult director Richard Linklater’s hand. The industrious adult seemed to have acquired the boy whose rearing would be his art, and the only question was whether or not time would be enough to capture boyhood’s simple complexities.

For Linklater, time meant truth. Without it, an injustice would be committed upon his latest and vastly ambitious Boyhood.

In this film, small and big moments all come within a narrative. However, Linklater did not want to adhere to the kind of narrative that cinema typically defines itself on. No arcs, no climaxes, no acts that clearly define a beginning, middle and end—Boyhood became simply about life, with its ebb and flow, and how a familial unit evolves with it.

At the center of all of it is the titular boy named Mason (Coltrane), a pretty typical suburban kid in Texas who we follow throughout the years of adventure, triumph and tragedy. His older sister, Samantha (Lorelei Linklater), is a pain at first until she becomes a quiet support system. The siblings’ hardworking mother (Patricia Arquette) goes in and out of various tough relationships, and their absent dad (Ethan Hawke) clings to his own youth while attempting to be a bigger part of his kids’ life. Through every character, we see all the tropes of American childhood unfold in real time.

But what we need to remember is Boyhood is neither a documentary nor a conventional narrative piece. What discerns it from something like Michael Apted’s Up series, which documented the real lives of British school children over 49 years, is that all of Linklater’s characters are fictional with a script at hand. What distinguishes them is the “gestation time,” as Linklater calls it.

What he means is that in between filming, every cast and crew member had time to grow physically, mentally and emotionally, with the ability to look back on the previous years of filming and change something within.

This truly ends up having an inevitable and harrowing influence on the film’s spirit. Even when the windows into each year of the family’s life are really quite small, sometimes only a couple of minutes, it all is a piece of a seemingly infinite puzzle of moments that add up to the final act of becoming an adult, or in the parents’ cases, better adults.

What will surely strike most viewers, especially those like me who grew up in the ‘90s, are the popular culture references that cue each step forward in time. From the Harry Potter craze to viral YouTube videos, Linklater avoids overtly expositional ways of telling time. Just like his previous classics Dazed and Confused (1993) and the Before trilogy (1995-2013), Linklater has a knack for capturing setting with unique fashion.

At first, however, I saw these moments to be all too frequent and almost gimmicky or distracting. However, Linklater’s genius then reminded me that he was not recreating these nostalgic moments; he was capturing them as they were happening at the exact same time that you and I were.

Anticipating reactions like mine, Arquette attested, “If you removed all these pop culture references, you would be disingenuous,” to the exact integrity of the film.

And that’s the real focus of the vision of Boyhood, to avoid the kinds of cinematic habits where amplification and deception are relied on to make an impact on the audience.

Hawke argued,“So many problems with movies today is that they create false narratives,” because they condition audiences to believe that plot points define life.

However noble and true this statement is, it also resulted in a vastly overlong film. Before you reason that childhood is long and so should be the film, we cannot forget that this is still cinema, which has more potential than to just mirror time. The editing, while interesting in its transitions, could have been used to create something even more immersive.

That being said, Linklater seems to have adopted somewhat of a mantra, one in which time isn’t simply relative, but necessary to feel what you experience, allowing Boyhood to simply be and become, much as a boy does.

Boyhood releases in theaters on Friday, July 11, 2014 in Los Angeles at The Landmark and ArcLight.