Tall, Left-Handed or a Knitter? Scholarships are Available 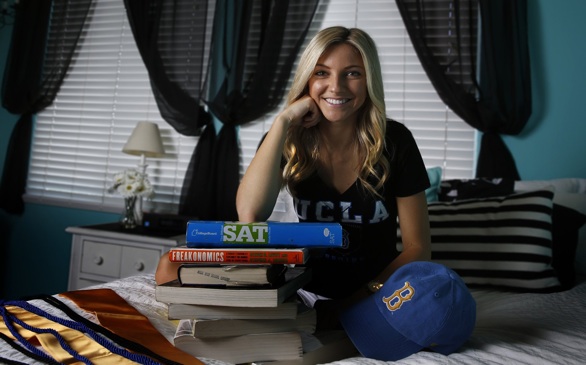 (THE SACRAMENTO BEE/MCT) Trent Peterson won $2,000 this month for being tall.

The 6-foot-7 Rocklin High School graduate received a $1,000 scholarship from the Sacramento Tall Club and another $1,000 from the national Tall Clubs International Foundation. Those awards were two of the four scholarships Peterson landed to help pay for his mechanical engineering studies at the University of California, Irvine, after applying far and wide.

“Always keep looking, because there are always scholarships out there,” he said. “Keep looking.”

Even one’s last name can qualify. A scholarship to Loyola University Chicago is available to Catholic students with the last name Zolp. Students born with the last name Gatling or Gatlin can win up to $18,000 to attend North Carolina State University. And any descendent of Lambert and Annetje Van Valkenburg, a 17th-century Dutch couple who settled in North America, can win a $1,000 scholarship.

Students who can’t trace their lineage back to New Amsterdam can always write an essay explaining how they would escape a zombie apocalypse and which five items they would bring along to ensure their survival. A $2,000 prize is being offered to the winner – age 13 and older – by www.scholarshipexperts.com.

UC Davis donors provide a scholarship for a student who doesn’t drink or smoke and another for a descendent of a soldier who fought for the Confederacy, said Ron Bynes, assistant director of financial aid for undergraduate scholarships at the university. The latter award is offered by the United Daughters of the Confederacy.

Across the causeway, California State University, Sacramento, students who can trace their roots to a Union soldier are eligible for scholarships from the Daughters of Union Veterans of the Civil War.

Donors offer scholarships for many reasons. Families establish them to honor a family member who died. Organizations offer scholarships to students who share their ethnicity, occupation or overall mission. The crazier the scholarship, however, the more likely it is being offered by a company that is trying to generate publicity for its product.

Many students have heard they can earn up to $10,000 by creating a prom outfit with Duck Tape, but few know about the $25,000 prize offered in the Jif Most Creative Sandwich Contest, or the $10,000 award for designing a greeting card for The Gallery Collection, or creating a poster for the North American International Auto Show.

UC Davis counselors steer students away from scholarships that are too commercial. Some scholarships require that applicants sign away their right to their creations, even if they don’t win an award, Bynes said. “There are a lot of weird things out there. We look for things that directly benefit our students.”

Scholarship seekers may be better off looking for awards targeted to students of a particular ethnicity, gender or religion, as well as those given by industry associations like the American Fire Sprinkler Association, Washington State Potato Foundation, Beef Industry and National Gay Pilots Association.

Peterson said he made a job out of finding scholarships during his senior year.

The 18-year-old decided not to pursue athletic scholarships in either volleyball or basketball, opting to focus on academics at UC Irvine. He applied for 15 scholarships in all. Besides his Tall Club scholarships, he received awards from Ronald McDonald House Charities and the Springfield Scholarship Club at Whitney Oaks in Rocklin. The volunteer group throws fundraisers throughout the year to fund scholarships for Rocklin-area students.

Peterson said his family makes “enough income not to qualify (for financial aid), but not enough where college is a piece of cake.”

At University of California campuses, students whose families earn $80,000 or less have their tuition covered by financial aid. Bynes said students from middle-class families who don’t qualify for grants are the most likely to hunt for scholarships. In California, he said, a family making $150,000 “is barely getting by, especially if you have two students in college.”

Laguna Creek High School counselor Alycia Sato said students should start their scholarship hunt in ninth grade by making a list of everything they do outside of school. “Keep that in a file – freshman through senior year – and you can pull from that (for essays),” she said. Get letters of recommendation along the way.

Many scholarships go unused because students either don’t know about them or don’t want to write an essay, which most require, Sato said. A national scholarship for left-handed students was given to a right-handed kid one year because he was the only one to apply, she said.

Peterson figures the aversion to essays has worked to his advantage. “That is one of the reasons I was going for those – the applicant pool would be so much smaller,” he said. He said most of the scholarship essays he wrote were about 500 words or a couple of pages, “not crazy essays that took a lot of time.”

Both Bynes and Sato say students should begin their search for college money close to home. “Look at where your parents work, your school, your chamber of commerce, any affiliation your parents have – fraternities and sororities,” Bynes said. “All of those things.”

Students should also go to their campus career centers to check for posted scholarships, pick up applications and meet with guidance counselors. “Seniors, especially, should visit their career centers weekly to receive updated information,” Sato said.

Students also should go to websites like www.fastweb.com, www.scholarships.com, www.collegescholarships.com and www.gocollege.com, which ask them to set up a profile that allows the site to generate lists of scholarships for which they are eligible, Sato said. They should search as many high school and college websites as possible, Bynes said.