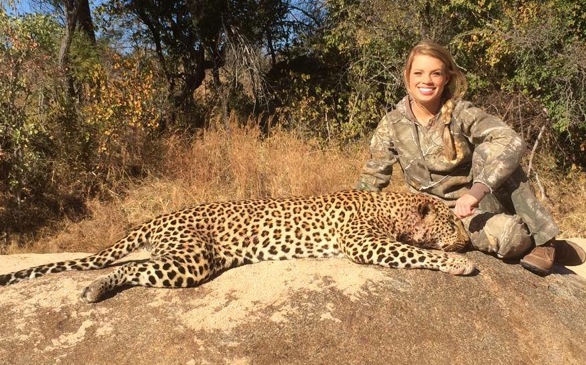 Take a look at Kendall Jones' Facebook page. If you're an animal lover or anti-hunting supporter, we're sure you'll either be in tears, or you might be seeing red after you browse through her photos.

The 19-year-old Texas Tech University cheerleader posted graphic photos of her posing with reportedly dead animals that she hunted in Africa, including a hippo, elephant, lion and leopard, among others. Now, Jones is facing online backlash.

"I hope she is the next one to be shot," wrote one Facebook user under a photo of Jones smiling with a dead leopard.

"You are a poacher," wrote another.

However, Jones claims she and other hunters are conservationists, not merciless killers. The wannabe TV host wrote, "Controlling the male lion population is important within large fenced areas like these. Funds from a hunt like this goes partially to the government for permits but also to the farm owner as an incentive to keep and raise lions on their property."

In the comment section of the photo where she's posing with the leopard she also wrote, "Hunters are the biggest conservationists there are. We want animal populations to grow and thrive!"

But, it seems that many people are not buying it. In fact, someone created an online petition to urge Facebook to remove Jones' page.

"For the sake of all animals, especially the animals in the African region... where hunters are going for fun just to kill an animal!" states the petition. "Some people have been reporting the pages lately but it seems Facebook is not concerned about what Kendall Jones is promoting in her page."

At the time of posting, this petition has a little over 53,000 signatures.

There's also a second petition on Change.org that has a little over 9,000 signatures at the time of posting. This one is aiming to stop Jones from hunting in Africa.