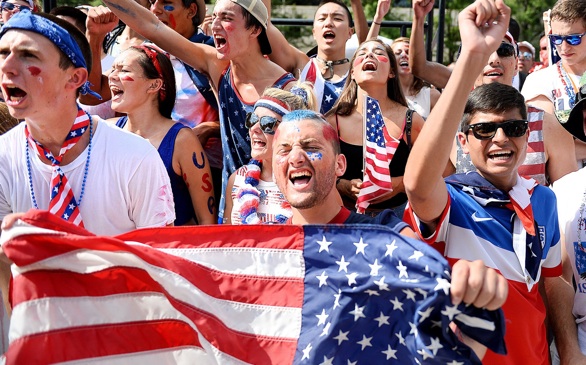 But they weren't disappointed in their team, not when the Americans went down 1-0 three minutes into extra-time.

At the Fox & Hounds Pub in Studio City, they just cheered harder.

"USA will win! USA will win!" yelled the mostly U.S. fans packed standing room only in the waning minutes of the U.S.-Belgium World Cup match. "USA ain't nothin' to (expletive) with!"

Most felt a sense of pride that the Americans had gone further in the tournament than expected and earned a degree of respect from the international soccer community.

"Lot of close misses at the end. Incredible heart. They had so much fight," said Alan Minsky, 48, of Studio City. "Down the stretch, they surprised Belgium.

"They were absolutely brilliant."

If anyone should know, it would have been fans at the Fox & Hounds. Since the British pub on Ventura Boulevard was founded by a former soccer player two decades ago, it's been a mecca for Los Angeles soccer fans.

Tickets posted for the pub's fifth World Cup party two days ago sold out within hours, with hundreds begging to see the U.S.-Belgium game.

"This is like a national holiday," said Fox & Hounds owner Douglas Milton, before the game. "If this place could fit 600 to 700 people, we could pack it."

Pack it, they did. They'd called in sick. Taken time off work. Or were just lucky enough to have the time to head to the pub, wrapped in Team USA jerseys, U.S. flags and even a mini-Uncle Sam top hat and Aunt Sam tiara.

An estimated 150 die-hard World Cup fans clustered beneath its Tudor rafters, lifting pints of Fuller's English beer and downing bangers from across the pond.

"It's the sport -- football. I'm stoked," said Rachael Loewenstein, 32, of Encino, bedecked in red, white and blue attire, who'd taken a half-day off to see the game, before its disappointing finale. Afterward: "They played hard, but just played hard too late."

Hundreds of eyes glued to jumbo screens seemed to will the ball away from the U.S. net.

And hoarse throats cheered the U.S. team despite their heart-wrenching last-minute loss. For 90 grueling minutes, the game stood tied 0-0.

Then three minutes into extra time, the Belgians revved up as Kevin De Bruyne spun around two U.S. defenders and slipped one in the net low past Howard.

Another Belgian goal and then the Americans got one to make it 2-1 and restore some hope in fans for a last-minute miracle.

"This team doesn't know when it's been beaten, clearly," one U.K.-born announcer remarked. "Sometimes in the World Cup, you follow a script that's been penned by Steven Spielberg."

But with the disappointing credits rolling, fans were already looking toward the USA Team World Cup sequel.

"It wasn't enough," said Cesar Ocampo, 34, who had taken time off his home Internet business and was wearing a World Cup jersey from his native Columbia. "The U.S. is good -- and it's only a matter of time until they win."

"I'm very disappointed," said Neil MacDonald, 52, of Studio City, a freelance TV executive who grew up in the United Kingdom. "I truly had believed that they could have beaten Belgium.

"But the rest of the world should be scared of what (Coach) Jurgen Klinsmann will do with the U.S. team in four years time."

"Next time," said Tara DitBurro, 31, of Studio City, who played soccer 14 years. "I am excited for next time."