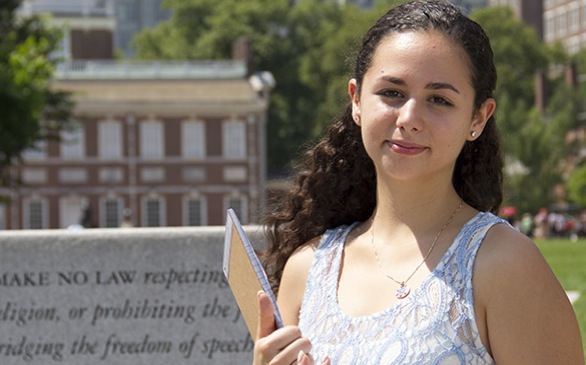 The 1st Amendment is one of the first things they teach middle or late elementary school students in social studies. And unlike what they learned in AP calculus, 11th grade English literature or other subjects students might find "useless in real life," the 1st Amendment is something they never forget, especially when it comes to issues involving free speech.

In California, Iowa, Illinois and Ohio, students are taking what they learned in their social studies class and applying it to their campuses by filing lawsuits that challenge their schools' free speech restrictions (via LA Times).

First up is Citrus College in Glendora, Calif. Twenty-year-old Vincenzo Sinapi-Riddle is claiming the college violated his free speech rights by preventing him from petitioning in a "free-speech zone" in the campus quad.

While Sinapi-Riddle was speaking to fellow students about his campaign against NSA spying, an campus official stopped him and said he was not in the "free-speech zone." Sinapi-Riddle also claims the official told him he could remove him from campus if he did not obey.

In the lawsuit, Sinapi-Riddle is arguing that Citrus College's "free-speech zone" is too broad, too vague and unconstitutional.

Lastly, two faculty members at Chicago State University are accusing the school of repeatedly trying to silence their blog that discussed alleged corruption within the administration.

All of the lawsuits are part of the Stand Up for Speech Litigation Project, which is sponsored by the Foundation for Individual Rights in Education (FIRE). According to FIRE's website, this project is "a national effort to eliminate unconstitutional speech codes through targeted First Amendment lawsuits."