Why Everyone Can Benefit from College Parent Orientations 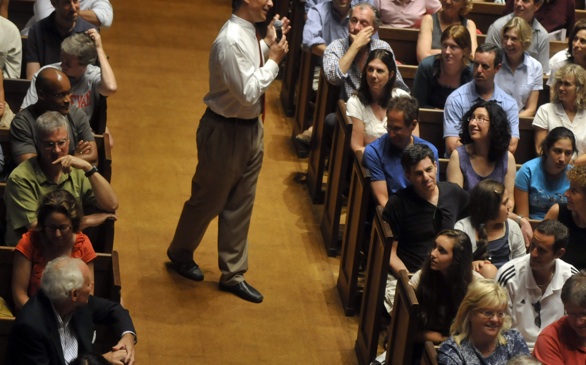 Parents participated in an orientation at Wesleyan University in 2010.
(Credit: Richard Messina/Hartford Courant/MCT)

I don't know about you, but when I went off to college I couldn't tell who was more nervous about the fact that I was leaving home: me or my parents?

Which is why I wish those two would've participated in a special parent orientation.

According to the Boston Globe, special orientations for parents are becoming more common these days. A survey found that 90 percent of U.S. schools offer this type of programming. They sometimes span over multiple days and include multiple sessions that teach parents how to let go but sill be involved. They also help reassure parents that their children are safe away from home.

Based off the Globe's report on a few colleges' parent orientation programs and speaking as a former college student, here are a few ways how these programs could greatly benefit students and parents:

1. They help parents ease students’ homesickness.
One of the things speakers at Boston College’s parent orientation told parents was to back off on the constant calling, texting, visiting, e-mailing or posting on their child’s Facebook page—very good advice.

Homesickness naturally happens for many students, and it eventually goes away. However, the constant communication with parents stalls it from disappearing. In my case, as happy as I was to get a phone call from mom, hanging up each time become more and more difficult and made me way too sad to really enjoy my first year of college. A phone call once a week or even once every other week would have sufficed.

Not to mention, constant calling, texting, etc. is also a distraction from schoolwork and socializing. That time spent talking to mom and dad for an hour every day (ok yes, that’s an exaggeration) could interfere with a student's study session for that Intro to Philosophy course or delay him or her from joining the pre-game festivities with their new friends.

2. They teach parents how to avoid being “helicopter” parents but still stay involved in students' lives, allowing students to become more independent.
A helicopter parent, which in my book is a parent that hovers over their child’s every move, is the absolute worst. No student can benefit from having a parent who’s constantly in their business, badgering them about their grades, personal finances, what they’re eating, if they’re working out, details about their romantic life, social life, etc. There’s a very fine line between being involved in a child’s life and suffocating him or her, and parent orientation programs can help parents define that line.

But at the same time, parents should still communicate and maintain a comfortable enough relationship with their children so that students can turn to their parents for advice or guidance. I found myself in one or two predicaments involving my classes and relationships that required a serious convo with mom.

“In an age of digital technology and social media, that process of parents and students communicating back and forth is very positive,” Angel Flagel of Brandeis University told the Boston Globe. “Parents feel like they are a part of what’s going on at campus. That’s not helicoptering, that’s just being proud of what their child is doing.”

Students want to gain independence in college, and that requires their parents knowing how to help their children do certain things without actually doing it for them. For example, if my parents lived within driving distance of Los Angeles, I would’ve totally loved it if they washed my clothes once a week or brought me food every night. But obviously, I would’ve never learned how to do those things on my own.

3. They reassure parents that their children are physically safe at college.
During college (and even in post-grad), my dad often sent me emails and text messages with news stories about the horrible things that happen in Los Angeles or near USC such as fatal drinking-and-driving car accidents, robberies and more. He believed that sharing these stories with me would remind me to be safe, watch my surroundings and not to go out walking around by myself at 3 a.m. It came from a place of love, and I appreciated it. However, no student wants his or her parents in a constant state of worry.

But with reports about campus shootings, sexual assault cases and drug-related incidents at schools across the country, many parents probably fear the worst when their children leave the nest.

At parent orientations, school officials and the campus police department can talk to parents about these issues and how they’re handled. They can go over policies and answer parents’ questions until the parents feel at least a little better about letting go.

4. They introduce parents to other parents, which could be comfort in and of itself.
I’m only assuming (because I’m not a parent, and my parents didn’t go to an orientation), but it seems probable that if parents meet other parents that are also having a hard time adjusting to the my-baby-is-going-off-to-college phase, this could provide reassurance and comfort. Meeting other parents tells them that they’re not alone, that they’re not overreacting, and it’s not unusual to feel sad. Who knows? Maybe parents will become friends with other parents and form some type of support group. Seems a little over the top (and I know my parents would never go for that), but you never know.

The truth is college is a tough transition for many families. Some parents might not need a special orientation but for those that do, they should definitely check to see if their child's college offers one.