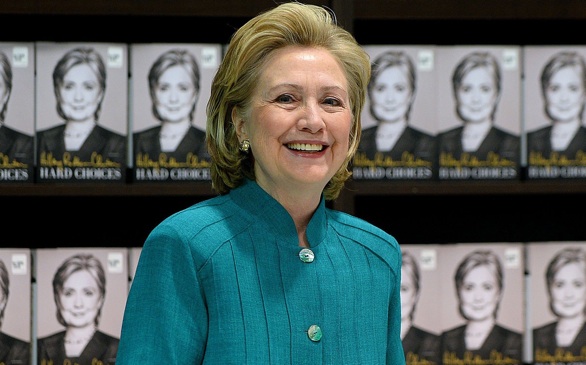 Having the presumed 2016 presidential candidate speak at your event will cost you a pretty penny, which is what the University of Nevada, Las Vegas (UNLV) has learned. The school is set to give former secretary of state Hillary Clinton $225,000 for speaking at a school fundraiser in October 2014; however, students are asking that Clinton give the money back (via MSNBC).

The UNLV student body posted on its Facebook page that with tuition increasing, Clinton's "private sponsorship" could go a long way at the school. "No one should receive nearly a quarter million dollars to speak at a fundraiser aimed to improve the University,"  reads the post.

UNLV students also started an online petition to urge Clinton to donate the money back. At the time of posting, only 84 people have signed it.

On the petition, the student government notes that Clinton has donated part or all of her speaking fees back to the colleges or universities before: "Secretary Clinton has widely been acknowledged as speaking for free for causes she champions, including clean energy, various women’s groups, and other laudable causes."

However, the Boston Globe reports that at least eight universities (including UNLV) have paid hundreds of thousands of dollars to have Clinton speak at their events during the past year. The University of Connecticut reportedly paid her $251,250 and UCLA paid $300,000. The other five schools (the University at Buffalo, Colgate University, Hamilton College, Simmons College and the University of Miami) did not tell the Globe how much they paid, but it's estimated that Clinton has raked in $1.8 million total from her speeches.

According to MSNBC, the money from UNLV is reportedly going to the Clinton Foundation, which "transforms lives and communities" through initiatives such as "improving global health, increasing opportunity for women and girls, reducing childhood obesity and preventable diseases, creating economic opportunity" and more.