The Lashes: Up Close and Personal 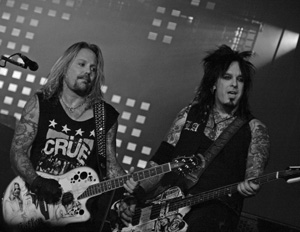 Just a block away from Spaceland, a modest sized van is parked inconspicuously on the side of the road. Here, five of the six Lashes sit languidly an hour before their performance with their messed up hairdos, tattered layered denim and a laissez-faire attitude to match their no fuss image.

The Lashes, a Seattle based pop/rock group with an upcoming debut album called Get It, is just one of the latest additions to join the burgeoning rock music scene heralded by like-minded bands such as Hot Hot Heat and the Strokes.

Collectively, they refer to themselves as the Lashes. Independently: guitarist Eric Howk is known as "the Sexy Lash," bassist Nate Mooter is "the Crazy Lash," drummer Mike Loggins is "the Sensual Lash," guitarist Scotty Rickard is "the Mysterious Lash," (keyboardist Jacob Hoffman was not present) and lead singer Ben Clark is "the Loud Lash," despite protests from Clark who would rather be known as the "Central Lash" or the "Team Leader."

There is no mistaking that 27-year-old Clark fits both profiles. The one time high school student body president has the gregarious personality of a bigwig politician and the assured confidence of a veteran rock star.

"A lead singer is as close to politics as you can get … I’m totally the politician of the band ... It’s kind of the same thing, but this way, I get to be drunk and look at cute girls and not get impeached at the same time," jokes Clark.

Although Clark may act like the leader of the group, the Lashes are uniformly democratic, especially when it comes to producing their own music.

"No one tells anyone what to play, but everyone has the power to veto," says Howk.

Clark formed the Lashes in early 2000 and recruited high school friends Rickard and Mooter from his hometown of Spokane and asked the other three members to join when he moved out to Seattle.

The six members forged a tight friendship and soon began parodying each other’s lives. All six Lashes have at one point or another worked for a telemarketing company, lived in the same house and shared just about everything from toothbrushes to girls.

"Everyone’s made out with each other’s ex-girlfriends," says Clark.

"But, there’s no tag-teaming," adds Loggins.

The Lashes are so entwined in each other’s lives that they even keep track of one another through individual MySpace accounts where facts are often mixed with bogus tidbits.

On Mooter’s profile, he identifies himself as a Mormon. (False). "That’s a joke … Mormons are all really silly and they all have awesome trampolines," says Mooter.

Rickard is a member of the Weezer fan club. (True). "I still have the card," says Rickard.

"Why bullshit people when you’re on MySpace? You know that the only people that you’re going to find are really fucking weird people and psychotics, so I wanted to seek out the craziest of the craziest," says Clark.

Weirdos are always preferred over haters, since the band has already experienced a wave of public backlash even before they signed with a major label.

"With our band, you really get us or you don’t," says Clark (Hence the title of their album, Get It).

The Lashes aren’t worried though. They expect great success to follow.

"The thing that nobody knows about the Lashes is that we’re their new favorite people ever … They just don’t know it yet," says Clark.

Get it, is currently available. The Lashes will perform March 1 at Chain Reaction, in Anaheim and March 6, 13, 20 & 27 at Spaceland, in Los Angeles. For more information, visit www.thelashes.net.
Article posted on 2/21/2006
This article has been viewed 2731 times.