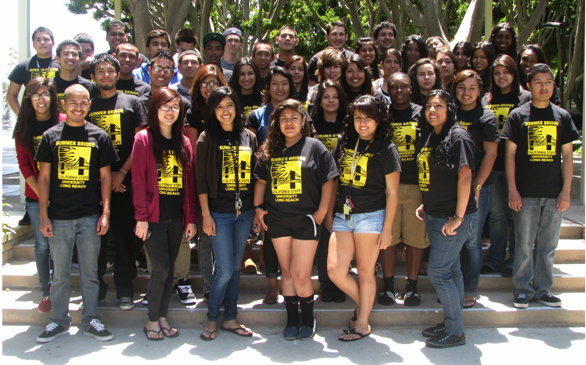 (LOS ANGELES TIMES/MCT) The 20 or so students are scribbling intently, heads bent over paper in the Cal State Fullerton classroom, when time is up: "Take a deep breath; you survived your first college writing assignment," English instructor Rachel David tells them.

The students share some nervous smiles and a few sighs, but they're not done. They get a homework assignment and will have to find time that afternoon between lunch, study periods and workshops to obtain the textbook and other materials for English 101.

They are a new batch of incoming freshmen who are largely on their own after the closely guided regimens of high school. And they're getting a head start as participants in the campus Summer Bridge program, a six-week session that helps entering freshmen who may need a bit more academic support as they prepare for college life.

They're staying in dorms — for many, their first time away from home — taking English and philosophy classes, and attending workshops on financial aid, time management, sexual assault and other issues.

"I'm excited just to be a college student," said Joseph Camacho, 17, who graduated from Katella High School in Anaheim. "All during high school you prepare for this moment and then it's here."

About 100 of the entering freshmen class at Fullerton are enrolled in Summer Bridge, one the largest of the programs in the 23-campus Cal State system. Nearly 41,000 students applied for freshman admission to Cal State universities for the fall.

The summer transition sessions have become college staples around the nation, including at many University of California campuses, and the Cal State programs are celebrating their 30th anniversary this year.

About 2,000 of the entering freshmen systemwide are expected to enroll in the programs, which are administered and funded at the campus level and designed for low-income and disadvantaged students and those who are among the first in their family to attend college.

Academic studies have shown that the programs are especially useful in helping disadvantaged students adjust to university life, take advantage of campus services and stay in school.

"By participating, it allows them the opportunity to be able to catch up to our general student population," said Cal State spokesman Mike Uhlenkamp. "These students are starting at a much different point and not only catching up but in some cases passing the general group."

Students also learn that they'll have to be both more self-reliant and also unafraid to ask for help, said Berenecea Johnson Eanes, vice president for student affairs at the Fullerton campus.

"High school is different, and you're going to have to be very independent and self-directed at a very big place," Eanes said. "Students in the program get a jump on knowing what it feels like, of knowing their way around campus and they don't tend to flounder around as much."

Steven Rodriguez said he hoped the program would help prepare him for the challenges of college — both academically and otherwise. On the first day of the program June 30, he planned to use some of his free time to explore a park on campus to find a good running course.

"We're a lot freer and making decisions and choices of what to do to be successful," said Steven, 17, a graduate of Savanna High School in Anaheim.

Steven and other students said the advantages of getting a running start to their college careers outweighed losing much of their summer to academics.

"We address that in class and workshops too, that their friends are texting them they should be at the beach," said David, who has taught Summer Bridge classes for about three years. "They're not jaded at this point; they're very excited."

Students in the program will be assigned a counselor through the campus Educational Opportunity Program who can help them throughout their academic career, said Dakotah Bailes, a Fullerton junior who participated in Summer Bridge in 2012 and is now a mentor to the current crop of students.

"A lot of these students didn't think they would end up in college," said Bailes, an entertainment and tourism major. "I have friends who were not in the EOP program who didn't speak to any counselors or advisors. But I've been able to stay a step ahead thanks to the program."

Ivonne Murguia and Thao Bui became friends during orientation. After English class, the two made their way to the bookstore to buy notebooks and other materials.

Bui, 18, said she chose the Fullerton campus because of its business school. A graduate of Rowland High School in Rowland Heights, Bui said she'll be taking five classes in the fall and hopes the time management workshop will help her plan a schedule as well as relieve some of the stress.

For Murguia, 18, the Summer Bridge program is her first experience away from her parents, she said.

"At least you're taking risks within a safe zone," said Murguia, who graduated from Anaheim's Loara High School.

She said she's also happy to be a part of a ready-made circle of friends who will help navigate college social life.

"It won't be like that first scary day of school," she said.