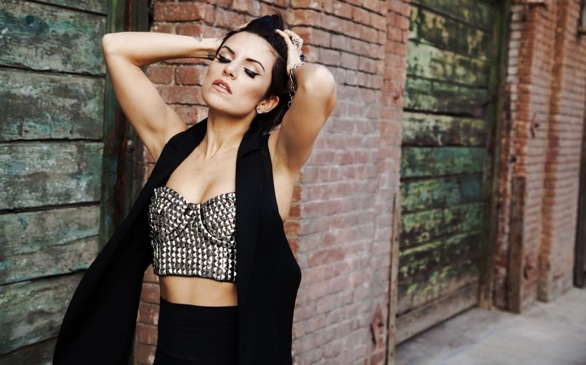 L.A. ARCHITECTURE INSPIRES GABRIEL KAHANE’S THE AMBASSADOR
An endless number of songs have been written about Los Angeles, but the just-released set from singer/composer Gabriel Kahane is perhaps the most unique ever.

A simple summation of The Ambassador is “10 songs for 10 buildings in L.A.,” but there is more to it than that. Each of the album’s songs, set to delicate melodies and thoughtful lyrics, reflects an impression that Kahane got from buildings and places such as (the no longer standing) Ambassador Hotel, Griffith Park, Hollywood’s Musso and Frank Grill, and Union Station.

Then, for each song Kahane sings from the perspective of a personality connected to the location. For example, on “Empire Liquor Mart,” he sings through the eyes of Latasha Harlins, a teen that was murdered in the store in 1991 (Tupac Shakur also wrote a song about her.)

Kahane lives in Brooklyn now, but as a native Angeleno he is intimate with the places he sings about. For those who might want to listen to the songs at the places of their inspiration, Kahane has included an address that corresponds to each song.

A BAD THINK: SLEEP
Talk about building an album from the ground up!

Michael Marquart, a Los Angeles resident and former member of the Flock of Seagulls who records as A Bad Think, had to build the recording studio too. Back in 2012, Marquart bought L.A.’s famed Flyte Tyme Studio from production wizards Jimmy Jam and Terry Lewis. He installed a new analog tracking room, rechristened the place Windmark Recording and then got to work on A Bad Think’s fifth album, Sleep.

The album is full of sublime alt-rock, with songs like “We All Fall” that recall the work of the late Gerry Rafferty. Sleep is self-released and available now.

JOHN MAYALL’S GOT A SPECIAL LIFE AND A SPECIAL SHOW
Few players carry the cachet that the legendary blues man John Mayall carries. Eric Clapton, John McVie and Mick Fleetwood of Fleetwood Mac, Mick Taylor of the Rolling Stones and guitar firebrands Coco Montoya and Walter Trout are just a few of the dozens of big names that are former members of Mayall’s band. No wonder that Mayall titles his just-released new album, his first in five years, A Special Life. And it’s quite possible that some of Mayall’s famous friends will show up when he appears at the Saban Theatre in Beverly Hills on July 24.

THIRD WORLD: UNDER THE MAGIC SUN COVERS ALBUM
Long-running reggae group Third World has just released Under the Magic Sun, a collection of reggae-fied versions of classic pop hits. Among the covers are takes on R.E.O. Speedwagon’s “I Can’t Fight This Feeling,” The Eagles’ “Best of My Love,” Paul McCartney’s “My Love” and chestnuts such as “I Go Crazy,” “Put a Little Love in Your Heart,” “Into the Night” and “Walking in Rhythm.” Fans can expect to hear some of the tribute songs when Third World plays Saint Rocke in Hermosa Beach on Aug. 8.

RAY GOREN’S L.A. SESSIONS
Ray Goren was playing a gig at Lucy’s 51 in Los Angeles, completely unaware that legendary producer Eddie Kramer (Jimi Hendrix, Kiss, Led Zeppelin) was in the audience. The soulful-voiced singer and Stratocaster wielder played a hot show that night and the rest, as they say, is music history.

Goren now has his debut EP out, a five-song effort produced by Kramer. Even though L.A. Sessions is just a brief showcase, it’s one that’s garnering rave reviews nationwide. Hear what all the well-deserved fuss is about when the Ray Goren Band plays the Central Avenue Jazz Festival on July 26.

SABRINA ANTOINETTE – Antoinette created quite a buzz when she appeared on the Chris Brown cut “Trumpet Lights” on his Fortune album. Now, the L.A.-based up-and-comer is about to release Kiss Kiss X Bang Bang, an EP of her own that’ll be on Brown’s CBE label. In the meantime, catch her live at Molly Malone’s on July 11 and Hemingways on July 22.