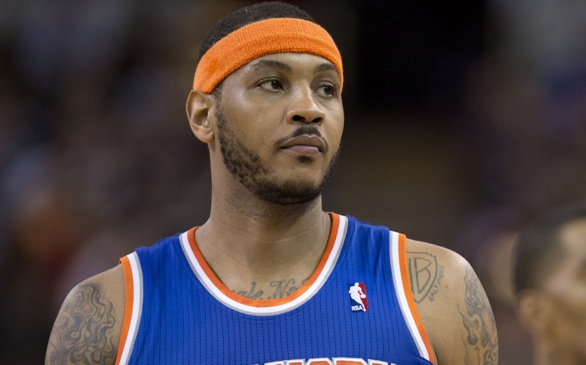 (NEWSDAY/MCT) Carmelo Anthony and Kobe Bryant were rumored to be playing pickup basketball together at UCLA Sunday. The Knicks have to hope Anthony doesn't make sharing the gym with Bryant a full-time thing.

Anthony could decide Monday whether he will remain a Knick or take his talents to Los Angeles. The Lakers have emerged as a serious candidate for Anthony although the Knicks are able to pay him $34 million more than the Lakers can.

Most view the Knicks as being in the lead in the Anthony race. He loves New York and has had some concerns about uprooting his family and moving his young son to a new city and school system.

The Knicks can pay him $129 million over five years, and team president Phil Jackson told him they would offer him a max contract when they met Thursday in Los Angeles.

Anthony has said playing for a team that can compete for a title matters most to him. The Knicks and Lakers don't fall in that category, and the Bulls and Rockets -- two other teams Anthony met with last week -- do. But Anthony's relationship with Bryant could factor into his decision. They've been teammates on the U.S. Olympic team, are close friends and talk often.

Bryant counseled Anthony two years ago when he was cast as a malcontent and divisive force under then-coach Mike D'Antoni and when Jeremy Lin and "Linsanity" was running wild.

Anthony makes his offseason home in Los Angeles, so it wouldn't be that big of a move if he chose the Lakers. It also isn't surprising that Anthony and Bryant would play pickup games together. Pro players often do that in the offseason in big cities. A UCLA senior associate athletic director tweeted that Bryant and Anthony were in the gym Sunday.

Jackson recently called Bryant "persuasive," and one would have to believe that if the two All-Stars played basketball together, Bryant tried to sway Anthony.

Before his meeting with the Knicks on Thursday, Anthony met with the Lakers, including Jackson's fiancee, Jeanie Buss. The Lakers reportedly made a strong impression.

In the meeting, which Bryant didn't attend because of a travel conflict, the Lakers told Anthony they would give him a four-year, $96-million deal. That's the most a team other than the Knicks can pay him.

The Lakers, as constituted, are not a contending team, but they're hoping to re-sign Pau Gasol. There's a sense that Gasol will stay with the Lakers if they get Anthony or fellow free agent LeBron James. Otherwise, the Thunder, Bulls, Spurs and Heat are in line for Gasol.

Gasol is on the Knicks' radar also. But they only have the $3.2-million taxpayer midlevel exception to offer as of now -- roughly $16 million less than he made last season.

Jackson has improved the roster from last season. He made a six-player trade with Dallas that included the Knicks getting Jose Calderon and second-round pick Cleanthony Early for Tyson Chandler and Raymond Felton.

Jackson has more to do, and a glut of wings he can deal. If he can unload the contracts of Amar'e Stoudemire or Andrea Bargnani the Knicks would have more to offer free agents now, but they're also banking on having a windfall of money next summer.

Heading into free agency, the Bulls were considered the Knicks' biggest threat in the Anthony sweepstakes. They have a ready-made contender but without a sign-and-trade the Bulls can only give Anthony about $70 million over four years -- depending on what moves they can make.

The Rockets, too, have a strong team with Dwight Howard and James Harden, and could trade Jeremy Lin to help get them the $96 million to give Anthony.

controlling interests in the