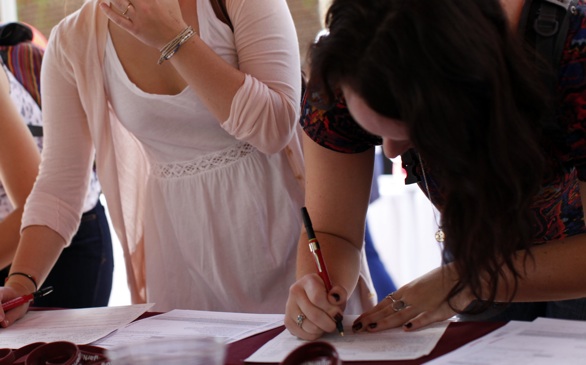 In North Carolina, college students are standing up for their rights, claiming voter ID laws discriminate against not only race, but also age.

Last year, a North Carolina law was passed that shortened the period for early voting and eliminated same-day registration and pre-registration for students as young as 16.

New York Times writer Matt Apuzzo states that “beginning in 2016, voters will need to show photo identification, and student ID cards, including those issued by state universities, will not be acceptable.” Out-of-state driver’s licenses will also not be accepted in most cases.

Republicans believe that requiring photo ID will prevent fraud, but lawyers for seven college students and three voter-registration advocates are arguing that voter ID laws are violating the 26th amendment, which lowered the voting age to 18 from 21 and declares that the right to vote “shall not be denied or abridged by the United States or any state on account of age.”

“There’s an unprecedented effort nationally by Republican-controlled legislatures to restrict the franchise in a way we haven’t seen in a long time,” a Democratic election lawyer bringing in the age-discrimination claim told the Times. “Young voting in particular is a part of the effort.”

The students’ lawyers note that the law is intentionally discriminatory since North Carolina prohibited the Division of Motor Vehicles from registering 17-year-olds who will turn 18 by Election Day.

According to the Washington Post, lawyers from the U.S. Department of Justice, NAACP and League of Women Voters will argue for a preliminary injunction on Monday, and a trial will be held in 2015.