Poker Events: Buddies Think They Know When to Hold ‘em 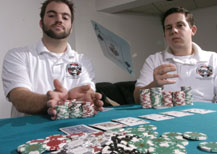 The bond between buddies Craig Rabin and Jason Beck is obvious, particularly in the way they tend to finish the dangling end of each other’s sentences.

The way Beck tells it, he called Rabin as soon as he got the idea in 2004 to start a business that would host free college poker tournaments at which students would compete for scholarships. It didn’t matter that the pair was separated by more than a thousand miles, with Beck in college in Miami and Rabin at Illinois State University in Normal.

Rabin picks up the story: "I was like, ‘This is a great idea.’ So I had this business class that was on small business ownership. We had to create a fake company. But I was thinking, why create a fake hot dog stand when we have got this great idea?"

Since 8th grade, Beck and Rabin have talked about running a business together. Now, less than a year after graduating from college with business degrees, they are hosting free traveling Texas Hold ‘Em poker tournaments at six universities. In April they will hold an online national championship with a scholarship prize pool of up to $20,000.

The budding entrepreneurs have succeeded in avoiding the corporate 9-to-5, but they are entering controversial territory in bringing a "legitimized" version of poker onto university campuses.

"With any poker event, there are going to be some reservations about gambling," Beck says.

"But the students don’t pay a cent to enter our tournaments, and everyone wins at least a small prize."

Beck and Rabin aim to ride the poker wave; there has been an enormous growth in the game’s popularity in general and in college poker, in particular, during the past few years.

There are about 3 million young people, between ages 14 and 22, who gamble at cards on a weekly basis, according to a recent study by the Annenberg Public Policy Center at the University of Pennsylvania. About half of the males attending college gamble at cards at least once a month, the research showed.

Long a popular pastime, now poker events on television have glamorized the game and those who play it.

Beck, who worked in the University of Miami’s intramural department and played poker in college, said he couldn’t help but notice students’ growing interest in the game. He said he thought scholarship tournaments – hosted mainly by university intramural departments and funded by local and national sponsorships – would allow students to enjoy the excitement of the game without the troubling aspects of gambling for money.

But as popular as it is, college poker is controversial, particularly when it comes to university-sponsored events. University officials have been criticized for being slow to recognize and react to problem student gambling in the same way they have to drug and alcohol abuse.

Nelson Rose, a professor of law at Whittier Law School in California and a leading expert on gambling, said the Collegiate Poker Tour Events seem to fall within the letter of the law because students don’t risk their money and don’t have to pay an entry fee to participate in the games.

"If it is free, it is generally considered not gambling," he says.

But Keith Whyte, executive director of the National Council on Problem Gambling, disagrees.

"As far as I have learned, they are providing pretty substantial prizes, and while it may not meet the legal definition of gambling, it is certainly gambling," he says.

"The concern we have is that they are sending the message that gambling is a good way to make money," Whyte says. "No university would support a college drinking or smoking tournament. So we find the presence of these tournaments odd."

Rabin said some university officials still say "no" to Collegiate Poker Tour Events, refusing to have their names and reputations associated with poker.

Others wanted to see how well the tournaments succeeded before they decided whether to climb on board.

Still, the idea is gaining acceptance: From six this year, the duo says they are planning to host between 25 and 30 tournaments in the next academic year.

"When I found it was a non-alcoholic event and there is no exchange of money and no charge for students, I thought that it was the greatest bet," Kelner says. "Let’s be honest. It is a Saturday night and students are going to go out and drink. We are always searching for ways [in which] students can be in an alcohol-free, safe environment."

These days, Beck and Rabin spend most of their days in Rabin’s parents’ basement in Buffalo Grove, Ill., looking for additional companies to act as sponsors to provide everything from scholarship money to food and prizes for the events. The biggest challenge for the fledgling entrepreneurs has been the scholarship prize, which was once promoted to be as much as $85,000 – an ambitious sum they never reached.

Every cent they make is being poured into their business venture, and they both still live with their parents.

"I have the shortest commute of anyone in Buffalo Grove," jokes Rabin.

Distributed by Knight Ridder/Tribune Information Services.
Article posted on 2/21/2006
This article has been viewed 3635 times.