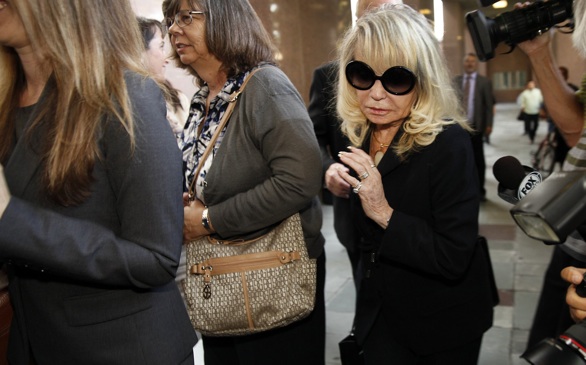 And he didn’t show.

“We call Donald Sterling!” lawyer Pierce O’Donnell shouted into the afternoon thickness of a crowded and sweaty Los Angeles Superior courtroom Monday afternoon, summoning the disgraced sports mogul to testify at the start of a legal contest that could determine the fate of Shelly Sterling’s $2 billion sale of the team to Steve Ballmer.

But Donald Sterling wasn’t there.

He had been subpoenaed, he had been scheduled, his testimony would be vital, but, for once, the man who in recent months had been spotted everywhere from Anderson Cooper’s show to the Polo Lounge was invisible.

O’Donnell, representing Shelly, knew Donald wasn’t there, but theatrically searched for him anyway. He swept his arms and jerked his neck with a toothy smile and the hint of a wink. If he couldn’t summon Donald Sterling as the first witness, he was at least going to pummel him with the first punch.

“Mr. Sterling has been subpoenaed to be here today, he is not here!” shouted O’Donnell, who then urged Judge Michael Levanas to issue a bench warrant for his presence.

This is going to get ugly. This is already getting ugly. Donald Sterling’s final desperate fight is going to strip the last shreds of dignity from his prone and tattered presence. He is not only going to lose this last fight, he is going to lose it badly, and in the process will suffer the sort of public humiliation that he has long inflicted upon others. Lots of folks in town will watch this trial and nod their heads in karmic satisfaction. Others, more sensitive, will simply be unable to watch.

Bert Fields, Shelly’s 85-year-old celebrity attorney, grabbed the microphone like a vengeful teen calling the neighborhood bully into the street: “We were very anxious to get Mr. Sterling here to face the music. I mean, he’s the guy that keeps delaying, keeps doing anything he can to keep his family from getting the $2 billion they are entitled to. Why? Just because of his ego.”

Gary Ruttenberg, Donald Sterling’s folksy boot-wearing attorney, kicked back, saying that Shelly’s team really didn’t plan on making Donald its first witness: “He was called as a ploy just to show he wasn’t there. Pierce O’Donnell had written out an opening brief he planned to present. … He just wanted to show to the judge, and he made his point, that Mr. Sterling is not here.”

Despite the expensive decorations, the battle lines here are clear and simple. Donald Sterling’s complaint is that Shelly Sterling did not have the right to act alone on behalf of the Sterling Family Trust in selling the team to Ballmer. Shelly Sterling claims she has that right because Donald Sterling, in accordance with one of the trust’s clauses signed by both parties last year, was removed from the trust for mental incapacity.

Donald Sterling’s lawyers argue that the examinations that determined that their client suffers from Alzheimer’s were conducted without Sterling’s understanding that they could be used to remove him from the trust. Furthermore, they argue that the results should have fallen under federal and state privacy laws and should not be made public. Shelly Sterling’s lawyers are basically shrugging and saying, hey, the man signed the trust, doctors say he’s suffering from a cruel mental incapacitation, that knocks him out of the trust, end of story, sale is final.

Levanas has already agreed with Shelly Sterling’s camp on virtually every point, setting up this trial to be a weeklong pounding of a former sports power broker who has become that sad tomato can who doesn’t know when to quit.

Ruttenberg kept firing back, accusing Shelly — who attended the pretrial morning session but was not in court when the trial began in the afternoon — of hatching “a secret Plan B” to remove her husband from the trust and referring to all evidence as “the fruits of a very poisonous tree.”

Yeah, Donald Sterling missed a great show at the first day of his own trial. The fun started when, during a rambling opening statement conducted while some courtroom observers fanned themselves and others slept, Ruttenberg accidentally referred to the Clippers as, well, that other team in town.

“They’re trying to leave him stripped of the Lakers!” he shouted.

These days, it’s hard to tell which fans would be more insulted.

For Donald Sterling’s camp, it went downhill from there. There was time for only one witness, and Dr. Meril S. Platzer was a real brain storm.

The neurologist testified that, after having Donald Sterling take two brain scans, she visited Sterling’s home for a final test, confirmed her diagnosis of Alzheimer’s, shared the somber and life-changing news with the couple … then retired to the Polo Lounge to share some wine with Shelly.

“About a half a glass,” Platzer said.

Then, amid their mourning, Platzer said the women were joined at their table by, among others, Donald Sterling and one of his lawyers, Bobby Samini, with Platzer testifying she and Samini shared horror stories about their divorces.

Seriously, who are these people?

If you’re Donald Sterling right now, Platzer’s wine glass is half empty, particularly since he is scheduled to testify Tuesday afternoon and his lawyers have promised he will show up. He reportedly will be cross-examined by Fields, who has bragged that he can make witnesses weep on the stand, but Samini said his man will be strong.

“Donald is not concerned that he’s going to cry,” Samini said.

“I promise you one thing, if there’s any crying in the courtroom, it’s very unlikely it will be coming from Donald, but it might be coming from other places.”

At this rate, it will be coming from anywhere.