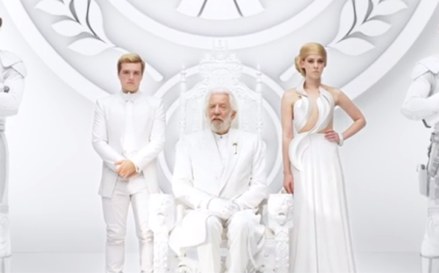 [CAUTION: Some SPOILERS ahead for those who didn't read the books!]

If the first The Hunger Games: Mockingjay Part 1 trailer creeped you out in a "omg-this-seems-so-real" kind of way, then the film's second promo video might make you feel a little more at ease.

In the video, evil President Snow addresses Panem again, with Peeta and (gasp!) Johanna Mason at his side. While Peeta still has that same stoic, frozen expression he had in the first Panem address, Johanna looks pretty annoyed, as if she's being forced against her will to stand there in support of the capital.

Beetee appears, and he has one message for everyone in Panem: "The Mockingjay lives!"

Watch the trailer above!