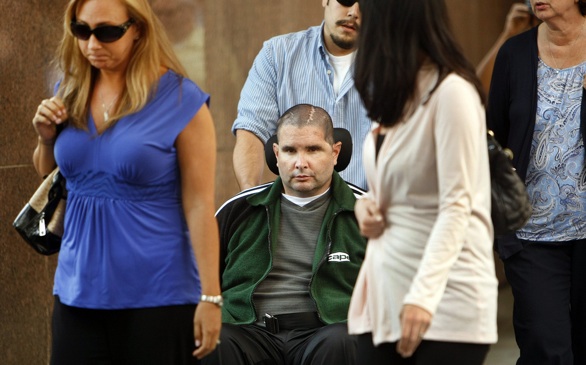 (Los Angeles Times/MCT)  A Los Angeles jury has reached a verdict in the trial over a lawsuit that claims the Dodgers and the team's former owner should be held liable for the devastating injuries to Giants fan Bryan Stow, who was attacked as he walked with friends in a stadium parking lot after an opening day game in 2011.

Stow, a Santa Cruz paramedic and the father of two young children, was beaten unconscious and left with such profound injuries that his attorneys said he will require round-the-clock medical assistance for the remainder of his life.

The jury had deadlocked on a verdict last week, but the judge ordered further deliberations.

The verdict was expected to be read in court Wednesday afternoon.

The lawsuit, filed on behalf of Stow and his children, accused the Dodgers and then-owner Frank McCourt of failing to provide proper security and lighting in the parking lot, creating a dangerous environment that led to the attack.

The suit said Stow and his friends had been taunted throughout the game and then were blindsided from behind as they walked across a dimly illuminated parking lot, all of which went unnoticed by security.

Stow’s attorney argued that McCourt had opted to go cheap on security, instead funneling money into his own lavish lifestyle.

"The Dodgers' own pocketbook prevented them from providing proper security," said attorney Thomas Girardi, pointing out that the team's security budget amounted to about 62 cents per fan in attendance.

But the Dodgers' attorney said the opposite was true, that the team had stepped up security and provided the most robust level of protection of any opening day game in team history. Stow himself and his two attackers, were ultimately responsible for his injuries, Dana Fox argued.

Fox said Stow and his family should have sought damages from Louie Sanchez and Marvin Norwood, the two men now serving time for the assault, rather than the Dodgers.