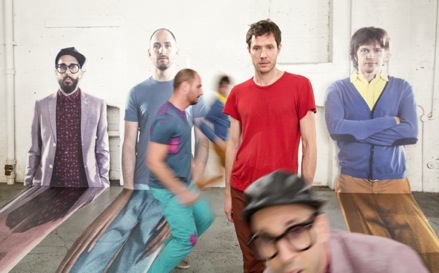 OK Go is at it again, this time with new music.
(Credit: Gus Powell)

We recently spoke with Nordwind about music videos, the upcoming tour and the new album.

When they were only 11 and 12 years old, Nordwind and Kulash met at a summer camp in Michigan. This chance meeting developed into a lifelong friendship that later expanded into a band that would go on to win a GRAMMY.

After releasing a few EPs, the group signed to Capitol Records in 2001. The band's first, self-titled album was released the following year, and the guys been picking up speed ever since, with a new album ready to release this fall on the band’s own label, Paracadute.

But first, let’s rewind to 2006, the year when one of OK Go’s most popular videos—“Here It Goes Again,” where the band performs a complex routine on top of treadmills—gained tons of attention and won the band that GRAMMY. Did you know OK Go didn’t make this video with the intention of having it go viral? Nordwind said that when creating music videos, the boys of OK Go really look for something that they’ll enjoy, not necessarily something that will get millions of YouTube hits.

He explained, “We sit down and think, ‘Okay, what would be fun to spend a couple of weeks on?” The main goal with their videos is to expand upon their songs, continuously creating and taking their music to the next level, and, most importantly, to have fun. The experience of putting together a video is exciting for Nordwind, as he likes how it allows people to enjoy OK Go’s music on a whole new level.

However, soon fans will be able to experience OK Go’s music outside of music videos; they can experience it during the band’s upcoming tour that will travel across the U.S. and venture overseas.

When asked if there was any place in particular he was especially excited to go this time around, Nordwind exclaimed, “Japan!” According to him, OK Go has an amazing and wonderful fan base in Japan, and he is anticipating spending some time over there (oh, and he also admitted he was eager to “eat lots of sushi”).

In the States, Nordwind said he was particularly looking forward to visiting the Pacific Northwest. In addition to some really great venues, he loves how beautiful it is up there. Make no mistake, though—he and the rest of OK Go have love for every city they’re hitting up. “We’re definitely excited for each show,” he said.

Although fans might’ve been waiting a long time to see OK Go perform in person, they’re probably more eager to get their hands on a new album. After all, it's been four years since we were treated to a studio album. Luckily, Hungry Ghosts is coming soon. This album reflects the band's development and growth within the past few years.

“[It's] very electronic,” said Nordwind. “It’s also probably the most ‘pop’ of our albums.”

This pop/electronic influence is something that has become very common in music these days. Rappers, rock bands, R&B singers and even country singers have dabbled in this mish-mash of a genre. However, Nordwind explained that despite this pop-electro influence that’s been taking over mainstream music, OK Go hasn’t deviated from the band’s true sound: rock.

“[Hungry Ghosts is] very electronic and ‘pop-y’, but we’re still definitely a rock band. That hasn’t changed,” he said.

While the album isn’t set to drop until Oct. 14, OK Go has given us a taste of what’s to come with the album’s first single “The Writing’s On the Wall,” which was released in June.

For those in Los Angeles ready to experience one of OK Go's live shows, you can catch the band at the Troubadour on July 22 or the Echo on July 23.