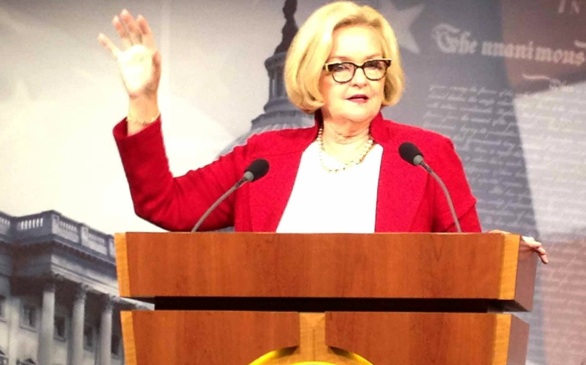 But the American Council on Education, which represents more than 1,700 colleges and university presidents, was “greatly disappointed” in a survey that was not balanced and draws unwarranted conclusions, the organization’s general counsel said.

That pushback could mean that bipartisan legislation by McCaskill and other senators will receive heavy scrutiny from the nation’s colleges and universities.

Last month, ACE President Molly Corbett Broad, the former president of the University of North Carolina, wrote a letter to the Senate Health, Education, Labor and Pensions Committee asking that any legislation on sexual assault on campus provide more “clarity and consistency” to how campuses should treat overlapping sex-crime laws and Title IX, the federal law banning discrimination based on gender, and to provide funding for more research and enforcement.

McCaskill said she would like to help provide that clarity and said her legislation is likely to include funding.

But she may not find a ready ally in ACE, based on the organization’s reaction to her survey.

The shortcomings on campus, McCaskill said, range from failing to have the federally mandated Title IX designated coordinator, to failing to follow federal law requiring institutions that receive claims of sexual assault to have a process to adjudicate those claims, to giving athletic departments oversight in cases of sexual violence involving student athletes.

McCaskill said that roughly 40 percent of the schools that responded to her office’s survey “have not reported a single investigation in the past five years,” despite a Centers for Disease Control 2012 study showing one in five undergraduate women has been the victim of “attempted or completed sexual violence during college.”

“That means they are either in denial or they are incompetent, because there is no way that at 41 percent of our campuses there were no sexual assaults over the past five years,” McCaskill told reporters.

But Ada Meloy, general counsel for the college group, said McCaskill’s interpretation of her own numbers do not give enough credit to colleges and universities, which often are not equipped to handle “incredibly difficult cases,” involving “word-on-word” situations that commonly stem from too much drinking.

McCaskill had earlier accused ACE of trying to thwart participation in her survey by sending out Internet-based guidance on how to respond to it. The organization said the guidance was simply meant to help university administrations deal with an unfamiliar congressional inquiry.

McCaskill said Wednesday she was pleased with the response of 236 returned surveys, about two-thirds of those her office sent out.

The senator said she will introduce bipartisan legislation later this summer to streamline laws governing sexual assault on campus and address investigative and prosecution protocols between universities and local law enforcement. Her bill is also likely to address training for people who take complaints of alleged sexual assaults.

Scott Berkowitz, president and founder of the advocacy group Rape, Abuse and Incest National Network, said the survey will “help us identify and fix systemic problems, such as the large number of campuses that currently provide no training for law enforcement, students or employees, as well as the alarming number that leave oversight of some cases to the athletic department.”

Survey respondents were granted anonymity, and the institutions’ individual responses were not released. McCaskill said she is keeping the surveys secret because they were done for research, not to single out institutions for wrongdoing.