Cosmopolitan.com is Becoming More LGBTQ Inclusive—and We Love it! 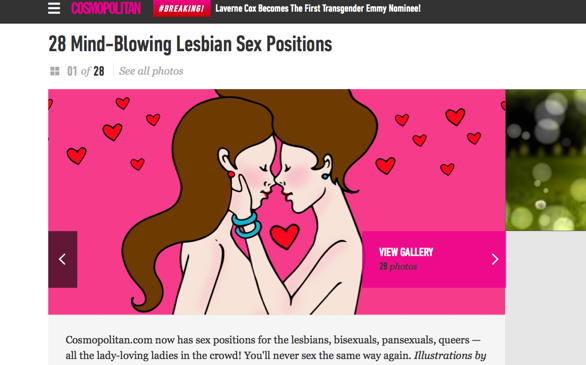 We’ve all read Cosmopolitan magazine at some point in our lives (yes, even you, fellas), either in line at the grocery store or as we're browsing through the newsstands.

Whether or not you actually read the magazine, you’ve probably read the publication’s risqué headlines plastered next to dolled-up celebrities on its many covers (“Turn Him On From Across the Room,” “12 Love Moves that Turn Him into Mush” or “How to Know if He’s Bullsh*tting You”).

However, do you notice a trend about those headlines? Aside from being mostly about sex and relationships, the headlines are centered on heterosexual interactions and are directed towards straight female readers. While the majority of Cosmo’s readers are indeed straight females, there are other readers that fall on different ends of the sexuality spectrum, hoping for more material that caters to their needs.

Well, Cosmo recently stepped up its game and created new material for lesbian, bisexual and pansexual readers. Although the publication made no explicit mention about being more inclusive during its website relaunch announcement on Tuesday (July 8), Cosmo did post a few articles that didn’t just cater to its straight readers.

In the article “28 Mind-Blowing Lesbian Sex Positions,” the magazine included the blurb “Cosmopolitan.com now has sex positions for the lesbians, bisexuals, pansexuals, queers — all the lady-loving ladies in the crowd! You'll never sex the same way again.” On Thursday (July 10), the magazine also posted another article titled “The 10 Best Ways for Women to Pick Up Women.”

Aside from the backwards homophobic criticism and the claims that the sex positions listed are "boring," there has been a huge positive response to both articles on Cosmopolitan's Facebook page. For example, in a comment on the sex position article, one user praised, “I'm not a lesbian but I'm glad they posted something for them this is the first time I've seen this.” And Cosmo responded, “Happy you like it.  definitely a piece we're proud of.”

Sure, it's only been a few days since the new Cosmopolitan.com re-launched, but it will be interesting to see how the publication’s step towards becoming more LGBTQ inclusive will influence other popular publications and websites such as BroBible and Elle magazine. Hopefully, we'll see more media sites branching out in a similar fashion.