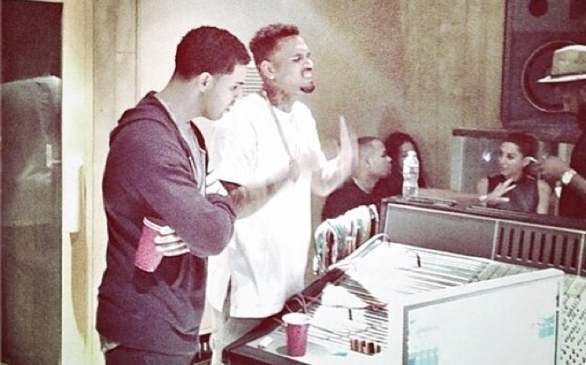 Drake and Chris Brown seem to be jamming out to music in the studio—together.
(Credit: Instagram)

Please, someone make a quick trip to Hell and check to see if it has frozen over, because we didn't think there would EVER be a day when Chris Brown and his nemesis, Drake, would be cool again.

Thanks to Instagram, those who follow Drake's fan site (Word on Word) saw a photo of the two rivals in the recording studio together (via MTV News). It was posted Friday morning, and it doesn't seem like any bottles were being thrown when the photo was taken!

If you remember correctly, it was rumored the R&B crooner and the rapper had serious beef supposedly over fellow superstar Rihanna. It got so bad that they ended up yelling at each other one night at a New York City nightclub. The yelling quickly escalated to bottles being thrown, causing injuries and a whole lot of damage.

However, it seems that these two have found some musical common ground; in the photo, Drake and Brown seem to be enjoying some tunes. Hopefully this means they'll be treating their fans to a new collab in the near future!

But, let's not get too excited just yet...

Blog
Bad Bunny to fight The Miz at Wrestlemania
264 views

Blog
Even after backlash from ‘insane conservatives,’ Cardi B makes music history with ‘Up’
255 views

Blog
Is this Green Day, in disguise, gleefully singing 'Ivankkka Is a Nazi'?
417 views

Blog
What's Ariana Grande been up to? Having tons of quar sex and making a great album about it
480 views