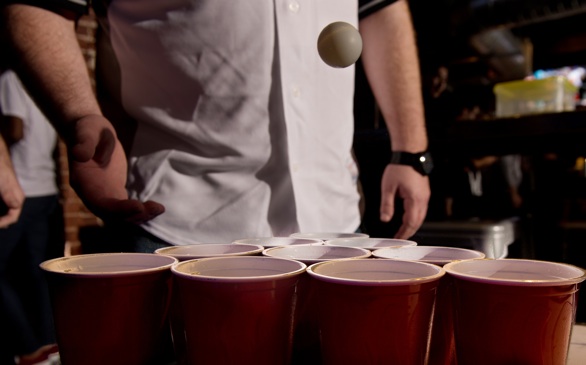 You might want to show off your beer pong skills, but will your future employers be impressed?
(Credit: Jose Luis Villegas/Sacramento Bee/MCT)

You might have a photo album on Facebook titled “Freshman Year!” that includes every photo you’ve taken during your first year at college. Unfortunately, you also probably posted multiple pictures of you at parties holding a red solo cup and drunkenly leaning on your friend. Or, there’s a keg stand happening behind you, your eyes are glazed over, and you look like you’re having the time of your life.

Although your photos probably received more than 50 likes and your friends commented on your hilarious caption about the number of shots you took that night, your employer who ends up finding this picture won’t be as impressed.

This is where Social Sweepster comes in handy.

“College students and recent graduates are at the highest risk for unwanted material surfacing the Internet,” said CEO and founder Tom McGrath said in a statement. “We created Social Sweepster to be a tool that safeguards against employers and recruiters looking to locate proof of poor decisions made in the past.”

This web application helps you clean up your social footprint, which plays a major role in the hiring process, by sweeping Facebook and Twitter accounts for incriminating content using object, text and facial recognition algorithms.

After the "sweeping" is done, a report is sent to you, informing you about all the pictures, statuses and tweets posted or those tagged since 2005. The threats are ranked as high, medium or low risks, and you have the option of untagging yourself, deleting the post or asking your friend to remove the heinous picture. Google Reverse Image is integrated with the app, so users can ensure that the photos aren’t posted anywhere else on the Internet.

According to the New York Times, the application has some glitches such as mistaking glares for beer cans. But at the same time, Social Sweepster has some impressive detection abilities, like spotting a red solo cup way in the background—something you would have never noticed with your own eyes.

Users can currently test the application free of charge, but Social Sweepster operates on both personal and enterprise levels, and service fees will be charged accordingly, including a one-time flat rate and monthly subscriptions.

This brings us to one final question: are students actually willing to pay for a service like this? Maybe, especially if students don't feel like going through all of their photos. But if they only have a moderate number of photos or posts that seem incriminating, they could probably delete all of that themselves.

However, for those students who have hundreds of photos and too many friends and followers to count on Facebook and Twitter who might have inappropriate photos of them as well, Social Sweepster could be a viable option. After all, are incriminating photos worth losing a job offer over?

“If you spent all this money on a college education and you’ll spend $5 on a coffee, why not prevent the slightest chance that a potential employer will be upset?” McGrath told the Times. “We’re providing additional insurance.”

Tech
Does the future of mountain climbing involve jetpacks? Maybe it should.
158 views

Tech
You can now ask to have your address, phone number removed from Google search results
209 views

Tech
UCF charges on with ‘power suit’ as a new battery for electric cars, spacecraft
189 views

Tech
‘Secret button’ on iPhones a big hit after going viral on TikTok. What to know
517 views

Tech
Are the free iPhone 13 deals too good to be true?
696 views