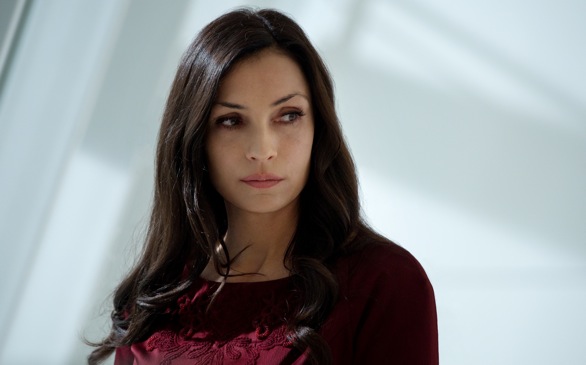 Diehard "Hemlock Grove" fans were undoubtedly up very late Friday morning (midnight, to be exact) to catch the highly anticipated premiere of the show's second season on Netflix. After a lot of juicy gore, blood, chills, thrills and shocking transformations in Season One, this second season returned at a quick pace with even more suspense, murder, amazing special effects and great acting.

In Season Two, Roman (Bill Skarsgård) and Peter (Landon Liboiron) face new responsibilities and realities, as Roman struggles with his birthright and sister's disappearance, and Peter moves in with Destiny (Kaniehtiio Horn) and gets a job. The series introduces Miranda Cates to Hemlock Grove, who has some kind of bewildering effect on both Roman and Peter. And then there's Norman (Dougray Scott), who's dealing with the loss of his family and some harsh truths.

Prior to the July 11 season premiere, Campus Circle caught up with "Hemlock Grove's" team and cast members at Los Angeles' sultry Redbury Hotel to discuss the supernatural horror show.

Here are some highlights from the conversations:

-Some of the cast members actually aren't that crazy about violence against women within the horror genre. Although some consider it a horror show, "Hemlock Grove" actually doesn't contain that much violence towards women. However, it's no secret that typical horror films and TV shows cast women as victims who get tortured, harassed and ruthlessly killed.

"I don't like it. I don't know who would," said Madeline Brewer, who plays Miranda Cates. "I don't know why it always has to be women. Maybe people like seeing women get the sh*t beat out of them? I think there is something wrong with that."

Famke Janssen, from X-Men fame, also isn't a big fan of violence against women in horror ("It's something that I find particularly upsetting," she said), which is why she loves this current season of "Hemlock Grove" and her role as the strong Olivia Godfrey.

"I don't get to play those types of victimized parts that much; somehow I don't get asked to do them, thankfully," she said. "In this season we have Madeline Brewer [and Madeleine Martin]...and they play really strong, interesting female parts...and I don't think ["Hemlock Grove" is] a traditional horror genre at all...I think we have a lot of different elements in this show that sets it apart.

-Speaking of the horror genre, Madeleine Martin actually doesn't like it that much. "I had not seen the show," revealed Martin when talking about "Hemlock Grove's" first season. "I try to watch horror, but I get too scared by it. My brother is a big fan of Eli Roth, and he said, 'You have to see this show," and I knew that his tolerance for horror was way higher than mine. So, if he really liked it, I wouldn't be able to handle it. So, I didn't watch it."

-Martin has plans for college in the near future, so we're not sure what we're going to see her star in after this season of "Hemlock Grove." The young actress is perhaps mostly known for her role as Becca Moody on Showtime's "Californication," where she gained a ton of fans. But when asked about what she has next on her plate, Martin expressed her plans to go to college.

"I've put [college] off for a long time, but I really want to go," she said. "It's hard with scheduling." Martin revealed she wants to major in philosophy, and she would love to study in England.

-Janssen makes the best vampire-like creature, because she appears ageless in person. The actress has always shone brightly onscreen, but up close, you can't help but notice her flawless skin and glow.

Sitting at a roundtable, she explained how she managed to stay looking younger. "I walk around with a parasol. The sun is one of the most aging factors," she said. "Trust me, I've done all of the damage early because I grew up in Holland, and when we went south on vacation, we'd have olive oil, baby oil...But now I don't do it anymore. That's the only secret I have."

Janssen also drinks "massive" amounts of water, acknowledging that it's perhaps not the best thing to do during a statewide drought.

-Eli Roth has an undeniable fascination with torture devices. During a prop demonstration, the show's executive producer enthusiastically showed us a bunch of cool items used on the show such as a rubber spear, a castration tool and a spiked collar. Roth explained his fascination stemmed from when he was a little boy, when he learned about the Salem Witch trials and the Holocaust. In fact, he told stories about his mother, who was known for saying things like, "Oh, well it's a good thing you're not in Poland in an oven."

-"Hemlock Grove's" special effects team is talented as hell. Along with a prop demonstration, we were treated to a closer look at the special effects items used on the show. On "Hemlock Grove," there is some bloody, gory, relatively disgusting werewolf transformations that require CGI but also body parts and blood that look real.

To make the gore seem realistic, the special effects team created items such as a gross prosthetic head with a wolf's head coming out of its mouth, a head with an eyeball that had a mind of its own and Olivia's "head" with a glistening tongue and dark stitches (watch Season One to figure out how she got those lovely stitches).

There was also a bloody, sticky werewolf costume that showcased a lot of the wolf's gory insides.

When I asked award-winning special effects artist Todd Master about the amount of time it took to make one of the male prosthetic heads, he said it took a half day to apply just the hairs on the face—just the hairs!

Season Two of "Hemlock Grove" is currently available on Netflix, so grab a snack, a drink and perhaps a buddy (if you get spooked easily), and start binge watching!